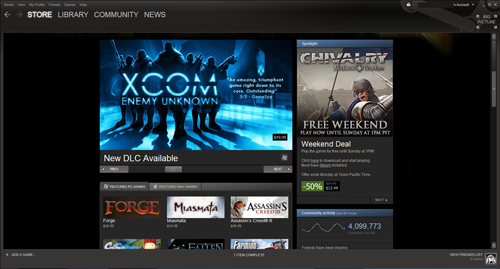 Gaming is a pastime that many students keep with them as they move into college life. Finding time between class and studying to unwind and escape the pressures of homework, deadlines and exams can buy enough extra sanity to get through the week. Unfortunately, college comes with its own set of financial pressures that ultimately take priority over lesser aspects of your budget, and with new releases running from fifty to sixty dollars there is little room left for a new game after tuition and fees.

“It’s hard to get any games on an RA budget,” says junior Nursing major Tyler Gilliland. “I might get a new game every three months, probably longer.”

While some may be content to stick with their current library, in some cases the community of a game may change with the release of a new installment in the series.

“When a new multiplayer game comes out, the population switches over,” Tyson Garner, freshmen Mass Communication major, said. “This situation often leaves gamers with a once popular game turned to an empty wasteland. Many students find themselves without the time or money to invest in gaming. I play less and less every semester and the more I get involved… I think I’ve bought one game since I’ve been in college and it was $25.”

Fortunately, all is not lost for the penny-pinching college students of 2013. There are many options for stretching every last dollar of a budget and re-opening doors previously closed. Patience is the first key item in the college gamer’s tool belt. New releases are tempting, but just one can suck the last few drops of life out of an already anemic budget.

Instead of immediately pouncing on the latest titles, students might be better served biding their time. Depending on the performance of the game, it may be anywhere from a few months to a few years before there is a price drop; within that time prospective buyers can do research on the game, read reviews, and even borrow the game from a friend to find out if it is truly worth their investment.

“I won’t buy a game if I have access to it elsewhere,” sophomore Computer Science major Chelsea Ball said. “One big way to save is networking.”

For those looking to add a new game to their collection between big releases, the bargain bin at Wal-Mart or Game Stop can hold the occasional gem in its depths. Students willing to do a little digging on the Internet can find a plethora of well-designed games at low prices, or even completely free. The indie gaming market is booming, small development teams can use the Internet to push out their own titles at a much cheaper price than major developers, and frequently gamers can find titles with more quality and craftsmanship than many games with massive teams and budgets behind them.

Social gaming and websites hosting a plethora of games developed in Flash are extremely common. Games ranging from simple puzzles or clones of popular board games to full-blown epic role-playing games can be found in a browser and played completely for free. Thanks to the Internet, a gamer could find high quality gaming experiences throughout the semester without spending a cent.

For the PC gamer there are many options for acquiring new games. Physical copies can still be found in stores, but digital distribution is quickly becoming the new norm, providing games from the smallest indie team to the largest publishing companies to be downloaded directly onto computers and laptops everywhere. A number of websites offer the option for direct download over physical copy, but in the arena of digital distribution Valve Software’s Steam has become one platform to rule them all.

Users create an account and download the free program, giving them access to a huge variety of games through the Steam Store along with a complement of social features, such as a friend’s list and instant messaging, achievements, and a community hub for each game. One of Steam’s biggest attractions is the frequent sales and free weekends.