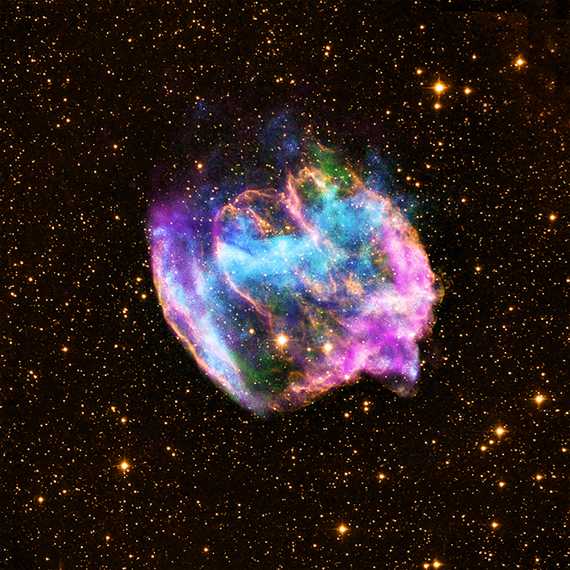 A supernova remnant that is located about 26,000 light years from Earth. Photo courtesy of NASA.

Scientists at NASA’s Chandra X-ray Observatory believe they might have found the youngest black hole in our galaxy after observing the remnant of a relatively recent supernova for two and a half days and releasing their results.

Supernovas are a cataclysmic event at the end of a star’s life cycle when it can no longer maintain itself and the core collapses. The resulting explosion can outshine a whole galaxy and release more energy than the star produced over its entire life.

Supernovas usually leave behind very small, dense stars called neutron stars. But sometimes if the gravity of the star overwhelms the outward pressure from the runaway fusion it will collapse back in on itself and begin to pull in the material ejected by the supernova. This leads to the forming the impossibly dense object known as a black hole, with gravity so strong even light can’t escape.

Supernova remnant W49B is relatively young at 1000 years old and 26,000 light years away. It has caught the interest of NASA due to several unusual properties of the remnant that indicate it may have formed a black hole, which would make it the youngest black hole in our galaxy.

“W49B is the first of its kind to be discovered in the galaxy,” said Laura Lopez in a NASA press release.

According to NASA’s page concerning W49B, supernova remnants are generally symmetrical in shape and in the distribution of elements through the stellar debris. Observers found that more material had been ejected from the poles of the dying star.

“In addition to its unusual signature of elements, W49B also is much more elongated and elliptical than most other remnants,” said co-author Enrico Ramirez-Ruiz. “This is seen in X-rays and several other wavelengths and points to an unusual demise for this star.”

According to NASA, the distribution of elements, such as iron, were uneven, matching theoretical models indicating an unusual demise for this star.

All these factors point to the remnant’s potential to harbor a black hole, which would make it the youngest known black hole in the Milky Way, with the next potential black hole being 17,000-21,000 years old and present scientists with the unique opportunity to observe the young black hole.

“It’s a bit circumstantial, but we have intriguing evidence the W49B supernova also created a black hole,” said co-author of the paper Daniel Castro. “If that is the case, we have a rare opportunity to study a supernova responsible for creating a young black hole.”