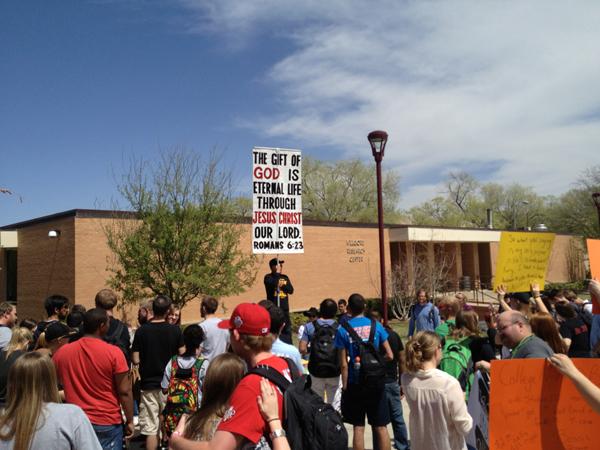 WT students walking past the buffalo fountain met an unexpected surprise Monday afternoon, April 8.  A travelling group of preachers bearing signs emblazoned with slogans such as, “repent or perish,” gathered in front of the Kilgore Research Center and loudly preached to passing students.

The content of their outdoor sermon ranged from proclaiming God’s love for all who accept Jesus as their Savior to condemnation of homosexuals and non-believers. Within a short time a large crowd of students had gathered at the pedestrian mall to watch the event and express their discontent.

“This is incredibly offensive,” Brook Bennett, senior history major, said. “There are fifty different ideas of Christianity out here and we are all against their ideas.”

Some students were holding signs with contradictory statements such as “If the rapture happens can I have your stuff,” and “I paid $3,925 this semester for an education, not your soap box.”

“These people are standing for the exact opposite of what Christianity is,” said Tyler brown, sophomore biology major.

Students of a wide variety of ideologies were present, from members of Christian organizations such as the Wesley and the BSM to members of the WT Secular Student Alliance.

“While personally I support the freedom of speech, it’s not the place for evangelizing,” Braden Cohorn, SSA president, said “There’s nothing we can do to stop it but it’s still not appropriate. I’m glad they gave us the opportunity to promote our organization. I can’t think of any greater publicity than that…we had a majority of the student body out there.”

The attitude of the crowd towards the group grew increasingly negative as time drew on. Students of different creeds asked questions ranging from their opinions on Mormonism and other sects of Christianity to justifications for their various claims , and many of the answers were met with boos and angry retorts.

At the end of the afternoon when the group began to gather their signs and leave, the remaining students burst into a rendition of Na Na Hey Hey Kiss Him Goodbye, by Steam, to bid farewell to their unexpected visitors.