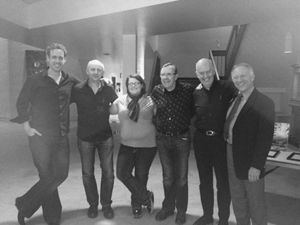 The band stops for a photo with student Shannon McKeown and Dr. Bob Hansen (right).

On Feb. 24 the Brock McGuire band, four Irish musicians playing a mix of songs one part traditional Irish music and one part Appalachian Bluegrass music, performed in the Northen Recital Hall to a packed audience. The band was scheduled to perform at WT last year but had to cancel due to the weather. The show included works from the band’s past albums and their more recent release, Green Grass Blue Grass, as well as traditional Irish music with a unique spin on it.

“This is music passed through the generations,” said Paul Brock while on stage.

Mandolin, piano, two types of accordion, fiddle and banjo were all represented in a series of upbeat jigs and tunes, as well as slower and more mournful pieces. One piece’s history started in Ireland as a traditional folk tune before being carried to French Canada by a friend and colleague of Brock’s, later hopping back across the Atlantic to France and finally landing back in Ireland. Another song switched gears heavily. After two upbeat and cheery songs the band switched to a mournful ballad about a homesick Irishman with Garry O’Meara providing the vocals.

Both during a short intermission and after the show Paul Brock, Manus McGuire, Denis Carey and Garry O’Meara signed albums and posters, chatted with fans about their music, and posed for photographs with excited students. After the crowds had dispersed, they spoke withThe Prairie to answer a few questions.

The Prairie: How long have you been playing together?

O’Meara: “Paul and Manus have been together for about 20 years now, Dennis about the last ten years.”

The Prairie: Why did you start mixing Bluegrass with traditional Irish music?

Carey: “More and more people are getting interested in the style.”

McGuire:“Especially after our last recording with Ricky Skaggs.

O’Meara: “There are a lot of links between the two genres, a lot of tunes that match.”

The Prairie: Do you see a difference in American audiences compared to Irish/European?

McGuire: “In America they want to hear the backstory.”

O’Meara: “Oh definitely. The people are really friendly and into the music. We also love all the mountains.”

While there is no guarantee the band expressed interest in returning to WT in the future.