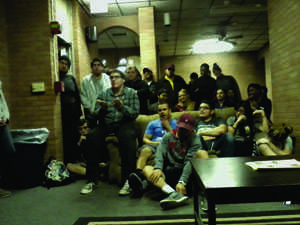 Cross and Jones residents gather at the Q & A meeting.

Beginning next fall, West Texas A&M will be expanding and moving its Living Learning Communities. Focused on improving the experience of incoming freshmen, the program involves each group of students living in the same dorm, taking the same classes and working with mentors.

The originally announced plan involved making both Cross Hall and Jones Hall co-ed dorms exclusively for students in the LLC program. Students displaced from their rooms in those halls would have been given priority over empty rooms in other dorms, though no other concessions to the move were announced.

According to an email sent out to students on March 11, Jones and Cross will remain single gender dorms. Two floors on Jones and three on Cross will have rooms reserved for the LLC program, though no mention was made of whether this would impact any other dorms.

“Specific to the suggestions you made, we have distributed learning communities more broadly across the residential inventory and have opted to not co-locate them by gender.,” said Vice President of Student Affairs Donna Eddleman in the email. “This is not ideal, but establishing more closely aligned and diverse communities is something we can aspire to do in the future; therefore, this letter serves to make you aware that both Jones and Cross Hall may be used exclusively for learning communities and first year students beginning in academic year 2015-2016.”

Students who will still be displaced will get priority on picking empty rooms in other dorms in the form of an earlier application date from March 21 through March 25, which comes after applications for students staying in the same room.

On March 4, a Q&A meeting was held in the Cross Hall lobby to answer the questions students had about the decision. Vice President of Student Affairs Donna Eddleman, Assistant Director of Residence Life David Wilson and Area Coordinator Lindsey Eggleston met with 50 to 60 WT students to discuss the choices as well as take notes from the students input.

“The institution had concerns about the number of students graduating and the persistence rate,” Eddleman said. “We’ve embarked on an initiative to change that. We are going to focus on being more intensive with Living Learning Communities. Our goal has been to have 400 students enrolled; the hard decision was where to put them.”

The collective attitude of the gathered students was one of disgruntlement. Many suggestions for alternatives or compensation were suggested, such as distributing the communities across more dorms, providing a discount for students moving to more expensive dorms or relaxing the requirements for moving off campus.

A primary concern of the students was that they felt like they were losing their middle ground. A large number of the attending students said that the reason they had originally chosen Cross or Jones was the balance between price and amenities such as air conditioning.

Many also expressed an attachment to the dorms and the communities they had become a part of during their residence, and feared that the decision would split up those groups.

“That’s the plan. The logistics are in the works but yes you still have a job,” he said.

Throughout the meeting, Eddleman highlighted the importance of communication between the students and faculty.

“The student voice is the most powerful voice on campus,” said Eddleman. “We’re here and listening. I’m not sure I can satisfy all your concerns but I can try to minimize them. Ultimately I’m responsible.”