‘The Importance of Being Earnest’ takes the stage 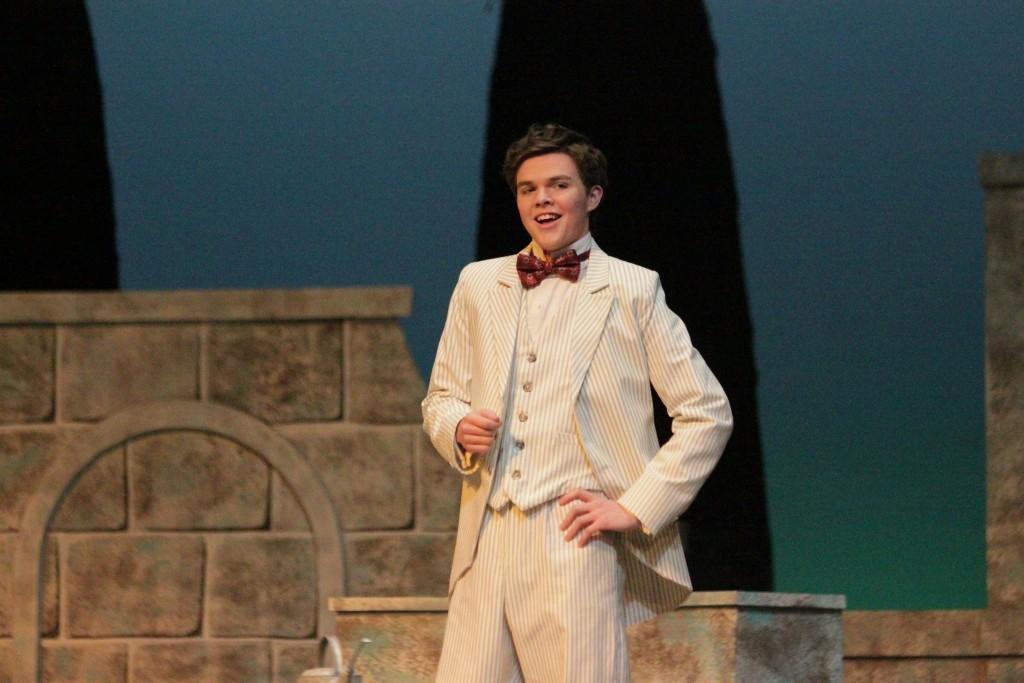 Ryan Land plays Algernon Moncrieff. The audience is introduced to his character in Act I, where the play opens in Algernon’s flat.

A world of wit and pleasure where eating a muffin is the best solution to solving a problem was brought to the stage as “The Importance of Being Earnest” opened Thursday, Feb. 5. The performance will continue to run this week from Feb. 11-14.

“I hope that audiences will simply enjoy and appreciate Oscar Wilde’s incredible use of language,” Stephan Crandall, Director and Assistant Professor of Theatre, said. “This play has so many incredibly funny remarks, comments and satirical statements that if one really listens, they can be highly entertained by it. I also hope audiences appreciate the opulence that we’ve tried to create visually. I’m extremely proud of how we are presenting the play, and I think it’s refreshing for an audience to get to enjoy high comedy.”

The play is set in the late nineteenth century and is framed in a British dialect, allowing the actors to practice their accents while also allowing them to bring identity themes to life in a comical way.

Oscar Wilde, playwright of The Importance of Being Earnest, wrote, “Man is least himself when he talks in his own person. Give him a mask, and he will tell you the truth.”

Very few characters throughout the play stay true to how they originally appear, and the actors of the West Texas A&M University production had to do background research to bring their character to life.

“As actors, we have also done our own research of the social behaviors that our characters would have,” Katie Ratliff, senior Theater Performance major, said. “With the play being so well-known, it almost makes it more fun to bring the characters to life because you get to bring new interesting things to your character that, perhaps, no one has thought of before.”

Crandall encourages the students to dig into research of the character and into the background information when preparing for a character role and said that it is especially useful when studying a play that is equally revered for it’s literary genius and theatrical effectiveness.

“Since many have read The Importance of Being Earnest, audiences should be able to thoroughly enjoy a well-staged and well-acted production,” Crandall said. “I try to respect what the author has given us, but also be creative in how to tell the story. Bringing a play to life is always a challenge, but I enjoy working with designers, actors and technicians to create “our” vision of a well-know historical or classical play.”

Members of the cast were able to work alongside designers, giving them the ability to better fulfill the roles of the characters.

“Adapting this play has been really cool,” Ratliff said. “I feel like I have to give the designers a ton of credit as well as Stephen, the director. Their sharp attention to the history and period of the play is really what has brought the script to the stage.”

WT allows students to attend theater performances free of charge, which virtually makes the theater experience more accessible to them. Even Wilde himself was an avid theatregoer in his college days.

“We provide a valuable service to the university community through cultural enrichment,” Crandall said. “I think every student should have access to see live theatre. There’s nothing else like it. I think the experience of live performance can enlighten anyone, and students certainly deserve the opportunity to come to the theatre and think, feel, sympathize, laugh, cry and be entertained, without worrying about the cost.”

Students are able to reserve tickets for the Feb. 11-14 showings through the theatre box office.

“I believe that by making our tickets more available for the students, we can bring them, at least for two hours, a relief from their schoolwork and all the rest of the stresses that being a student brings,” Ratliff said.