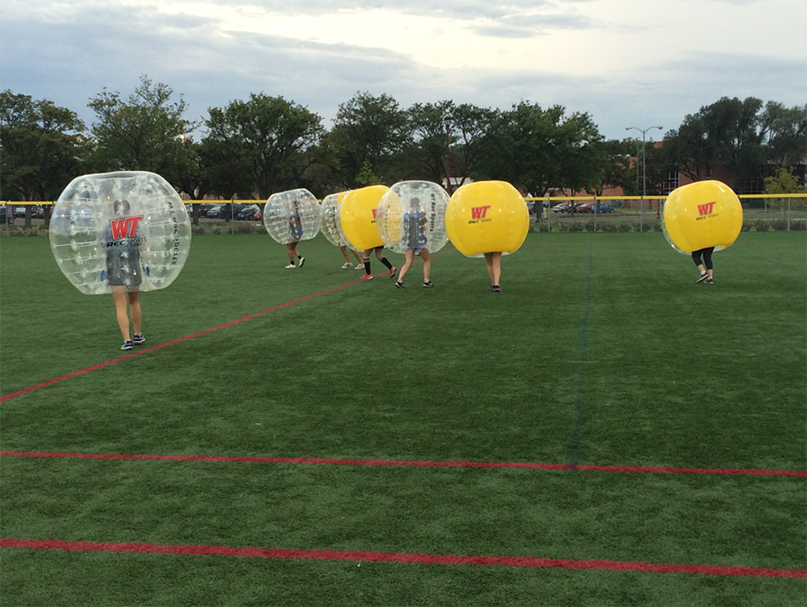 Students recently played in the first ever bubble soccer tournament at WT.

The Virgil Henson Activity Center is striving to keep students interested in the intramural sports program by frequently bringing new activities to campus.

Don Conner, the assistant director of Recreational Sports, said he is excited about the new sport that starts homecoming week, bubble soccer.

“All my life I get injured too easily, and all my friends say ‘you should live in a bubble’ and I have grown up playing soccer, so basically they have combined my life in a sport,” said Abby Betts, a junior Broadcast Journalism major.

After talking to students on campus many of them are getting anxious for their first tournament this week. Conner is excited that it’s during homecoming because he is hoping more people will see it and want to get involved.

“I think this will be a great way to get more students involved on campus because it will be a fun and interesting game to play in,” said Don Conner.

There are four quarters in one game, just like an actual soccer game, however each quarter is only five minutes long. In between games the staff will wipe down the bubbles for the new teams to use in order to keep all the bubbles sanitized.

Scoring is the same as field soccer. There are two goals on each side of the field that players will try to score in. The team that scores the most amount of points at the end of the game wins.

“I’m excited because I have never seen that side of soccer, and bubble soccer seems like a fun way to spice up the type of soccer I have played my whole life,” said Kirsten Kerbo a junior, Nursing major. “However, I think a challenge will be trying to get back up on your feet after you have been knocked down.”

Bubble soccer seems to be a sport that students on campus are all talking about. Teams are forming and getting ready for the big day. Bubble soccer should be a big hit for the students that have already signed up. Hopefully this will get more people excited and interested to play in the spring tournament.