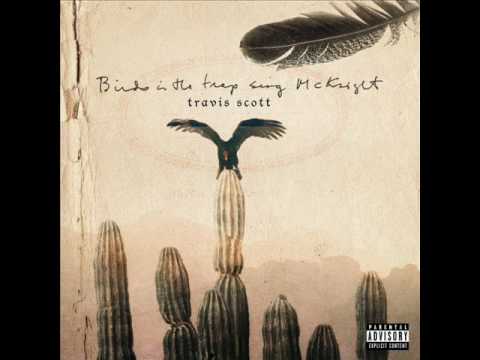 Travis Scott has put out a new album named “Birds in the Trap Sing McKnight”, which surprised me since it was released almost an exact year after his debut album “Rodeo. “Rodeo” was a tremendous album as it showed many layers of Travis’s musical abilities. Mostly since he said he never wanted to release an album that wasn’t album-worthy. However, he seems to contradict himself on the project because it feels like a rushed mix-tape-quality.
The song titled “The Ends” is an intro that is almost as thematic as the same intro to Scott’s last album and comes through with an unaccredited feature (be ready for plenty of those) from the legend Andre 3,000. This is the first glimpse into how this project is different than “Rodeo”. With “Birds in the Trap Sing McKnight”, Travis isn’t as expressive or in your face as much as he was on “Rodeo”. He tends to be more melodic and riding the beat while auto-tuned is on every song on this album.
The Song “Way Back” is probably the most relaxed song on the album, as it’s not focused on the bass but being melodic as well. And on the beat switch, Travis raps a short verse and then goes on to his melody which goes with the beat as well.
These two songs as well with “Through the Late Night” paint a nice picture for the first half of the album with the melodies, but for the song “Coordinate” and “Birds in the Trap”, they are more trap style songs that can get a little redundant. And “Sweet Sweet” ends the first half of the album and seems to leave a bad taste in your mouth.
That soon goes right away with the next song “Outside “, which is a really dark trap song that features 21 Savage in a different type of role, but he comes through with a solid verse. “Goosebumps” is another dark song that sort of seems like a love story type song with another feature seem from another song  from the usual Kendrick Lamar pocket. The song is one of my favorites and the production is great. “First Take” and “Guidance” are two songs that are influenced by Bryson Tiller and Drake respectively. “First take” has a very OVO type beat and “guidance” is almost Travis’s take on the popular “one dance”.

“First Take” and “Guidance” are two songs that are influenced by Bryson Tiller and Drake respectively. “First Take” has a very OVO type beat while “Guidance” is almost Travis’s take on the popular “One Dance”.

In the last half of the album, you’ll see three songs that were released before the album with “Lose”, “Pick Up the Phone”, and “Wonderful”. They are still solid and fit nicely into the scheme of the album.
This album is a completely different experience from “Rodeo”, where it was creative and changed tones many times. This is an album that can play in the background at a party, which is good because it knows its own lane as an album. Although it lacks the hits and star power, the album will fit well in Scott’s discography.