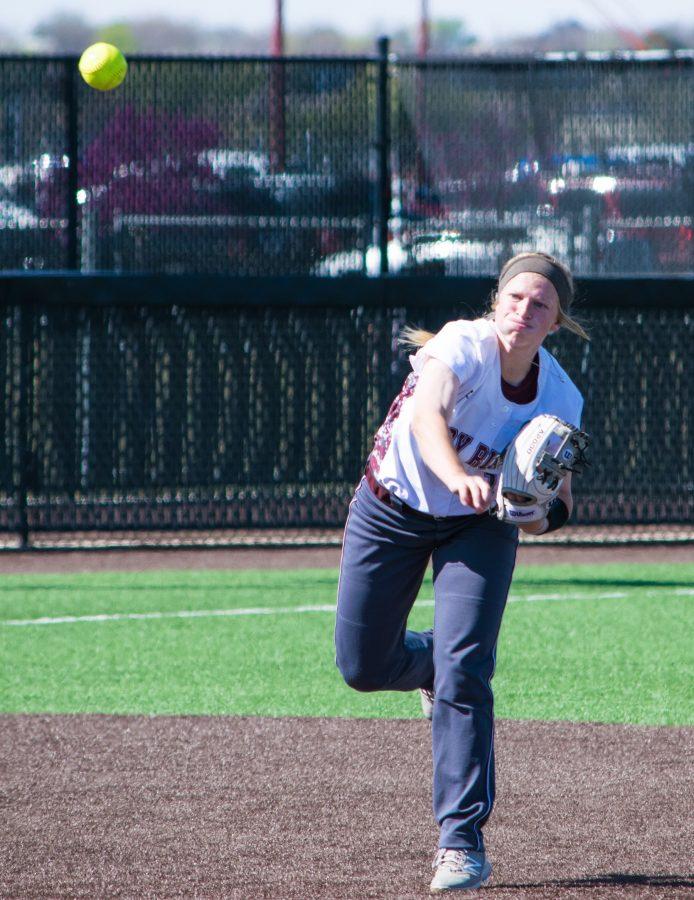 Freshman shortstop Alyx Cordell throws to first during the game against Midwestern State on Mar. 26 at Schaffer Park.

After dropping two of three to number one ranked Angelo State, the West Texas A&M softball team returned home and picked up three key victories this weekend over Midwestern State.

“I’m really impressed with the character of the young team and being able to come out and fight back from that adversity,” Lady Buff head coach Kevin Blaskowski said.

In the first game on Saturday, the Lady Buffs picked up a 3-1 victory behind the arm of junior pitcher Kilee Halbert as she picked up her 13th complete win of the year. Offensively, the Lady Buffs were led by RBIs from Shayne Starkey, Shea Ibrahim and Kourtney Coveney.

“I think we could have been better offensively,” said senior Shea Ibrahim. “But when we really needed it, we came through.”

In the second game of the series, the bats showed up for WT en route to an 8-0 run rule victory. Six different Lady Buffs drove in runs on the day with freshman Sierra Gentry leading the way with two RBIs. Alexis Alfonso pitched a six-hit shutout in the circle for WT.

“It was a good weekend,” senior pitcher Kami Merrill said. “It definitely brought us closer together as a team. It was a big confidence boost.”

In the series finale on Sunday, the Lady Buffs jumped out to an early 3-0 lead. However, that lead fell through as they found themselves trailing the Mustangs 8-3 heading into the bottom of the seventh. The Lady Buffs rallied to score six runs to secure the victory. Second baseman Kourtney Coveney led the offensive charge for the Lady Buffs with two home runs on the day. Kami Merrill showed up in relief to earn her second victory as a Lady Buff.

“We’ve just got to go out and find ways to win and when we start stringing wins together,” said Coach Blaskowski. “That’s going to give us some momentum.”

The Lady Buffs travel to Lubbock on Tuesday for a single game against Lubbock Christian. After that, WT will hit the road again this weekend to play UT-Permian Basin in Odessa.