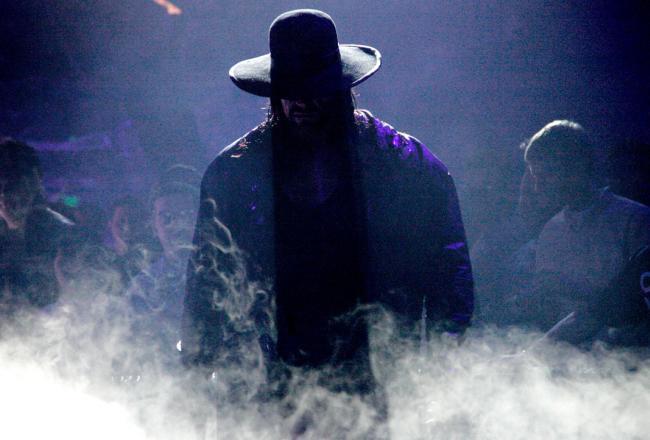 The bell has tolled, perhaps for the last time, for an entertainment legend. This last Sunday I stumbled across WrestleMania 33 while flipping through the channels. I don’t usually watch WWE action, with exceptions for a couple of guys. I was fortunate that I witnessed what looks to be the end of an era.

Say what you will about the WWE: everyone and their neighbor knows it is fake, acted, staged, blah, blah, blah. You don’t have to be a die-hard fan to know who the Undertaker was, and what he meant to the WWE. If for some reason you don’t, look up his retirement video and you will learn quickly.

As I stated before, I am not a huge WWE fan, but I knew who the Undertaker was quite well. He alone made millions of people, including myself, at least somewhat familiar with the WWE.

For 27 years, Undertaker has entertained us, struck fear to other WWE opponents.  Who didn’t ever get chills at least once when you heard that bell toll as he entered the arena?  I mean, the very moment you heard that bell everyone watching immediately knew what time it was.

Every time that eerie bell rang, people in the arena would go crazy knowing who they were about to see. You would see the reaction of his opponent’s face, and though it’s certain at least some were staged, they still knew they were facing an all-time great. If his entrance didn’t give you chills at least once, maybe his stare would, and if that didn’t give you even the slightest of goosebumps… I applaud you with disbelief.

Millions knew the legend that is the dead man, the phenom, WWE’s prince of darkness. Like Michael Jordan, Joe Montana, Wayne Gretzky, and Jackie Robinson he revolutionized the profession. Everyone respected him like no other. Sure, folks like Stone Cold Steve Austin, Kane, The Rock and John Cena all have their place, but Undertaker for over 20 years was THE man of the profession.

I remember when Brett Favre retired from Green Bay, I just kept thinking of what he brought to the game he played and what he meant to me personally. He was the biggest reason I became a Packers fan (boo and hiss all you want). Even when he finally retired for the last time I just kept thinking of what he meant not just to me, or the Packers, but what he meant to the game of football and what he did. Everyone knew who he was, no one doubted what he could do. He was one of the greatest to ever play.

It was hard to believe because he seemed like he was always there. You never thought of him retiring much because you just never wanted the ride to end. When the time came fans from everywhere gave respects as if it was the death of an era. It was an emotional time for fans. A time that could bring a tear or two to your eye.

My analysis applies to the apparent retirement of Undertaker. Fans respected him. They loved him, and they never wanted this time to come. The Undertaker has just always been there. It just felt like it could never end, you know? You didn’t want it to end.

Will he return? Well, he has been battling injuries of all sorts, he has been in the business for 27 years thus has more money than I’ll likely ever see in my paycheck. Finally, the man is 52 years old. I’ve been wrong before, but long story short. He’s done.

The bell has tolled on Undertaker’s career as well as part of my childhood, I’m certain that I’m not alone with that feeling. A legendary career shall now rest in peace, but the Undertaker will be long remembered. As the sandlot quote states, “Heroes get remembered, but legends never die”.