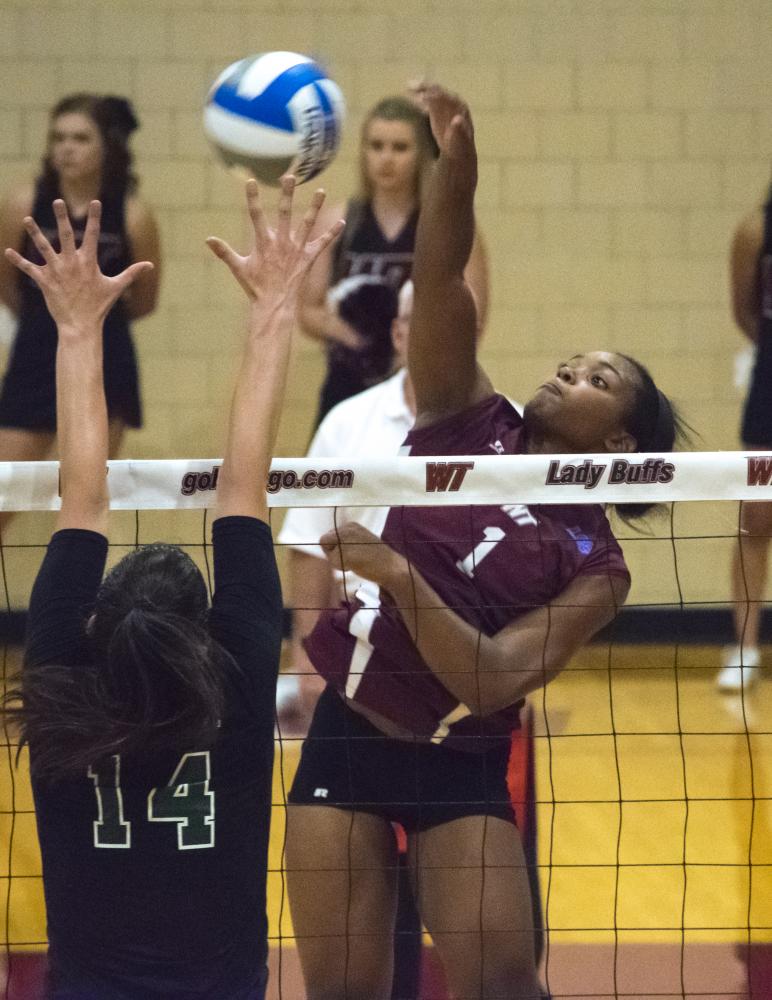 Kamille Jones (right center) hits the ball over an Adams State blocker during the match at the Box on Saturday, Sept. 2

The 2017 volleyball season is one of turn over for the Lady Buffs. Usually, this would be code for a transition year, or basically referring to a year where it is acceptable to be average because the players are young and the established players graduated.

This is not the case for WT.

So far, the Lady Buffs are running on a 7-4 record despite their roster that is chock full of 18 and 19 year olds. This has forced head coach Jason Skoch to shake up his coaching style.

“I try to prove a point to the team that yes, it’s early on but you better bring your A game,” Skoch said after the first tournament of the season. “Warm ups better be crisp. I’m treating these kids a little different now because they’re young and we want to send that message now.”

With ten underclassmen on a list of 17, there has been an opportunity for rookies to rise up and take a prominent role. Skoch said that he thinks this should not be considered a weakness, especially with the success they have had against nationally ranked teams so far.

“[Other teams with mostly seniors] are so much more limited in their growth potential than us,” Skoch said. “I’m already thinking long-term about this year and next year so these games are big.”

Freshman Hereford native Chandler Vogel said that no matter how close to home she is, being a freshman starter is still challenging.

“At the beginning, I was really nervous, but a good nervous,” Vogel said of her first tournament as a Lady Buff. “I was excited and I was ready. It’s so easy to be ready with the team and be excited with the team because you know you can trust them. You know they’re going to be there for you and help you get out of a slump. It was a lot to take in but it was really exciting.”

Skoch has been pleased to see young players taking risks.

“Every kid always struggles with understanding how that grit bleeds into other things,” Skoch said. “It builds up trust more because it’s like, ‘I’m going to go for it more because I know she’s going for it.’”

Vogel has been one of those difference-makers for the Lady Buffs as the starting libero.

“It’s really exciting but it also puts a little bit of pressure on because if you are starting, you know that you have to be there. There’s no excuses for not playing. It’s nerve-racking a lot of times and it’s exciting but it’s good to have that feeling that people trust you and people want you to be there.”

“It’s definitely a little overwhelming for the young kids at first but I think they’ve done a really good job,” Smith said. “I think our freshmen and sophomores have come out very strong and just realized that we need to take ownership of the team. I think we’ve done well doing that. Everybody just looks around and thinks, ‘I need to get it done’. I don’t think anybody really cares about how old they are or what position they are. They just want to get the job done and whoever can do it will do it.”

Vogel said that the little time she has spent with WT has taught her a lot.

“The college game is very fast,” Vogel said. “You have to keep up. As long as you come together as a team then you’re fine, even if you do have a little slump.”

Skoch said he is excited for where this season is headed.

“Long story short, I’m not going to get as caught up in what our goals are,” Skoch said. “We’re going to keep [players] here and not do any of that funny stuff but if you’re here, you better be focused on getting it done. So we’re a little lean but I feel like we’re in a good direction.”