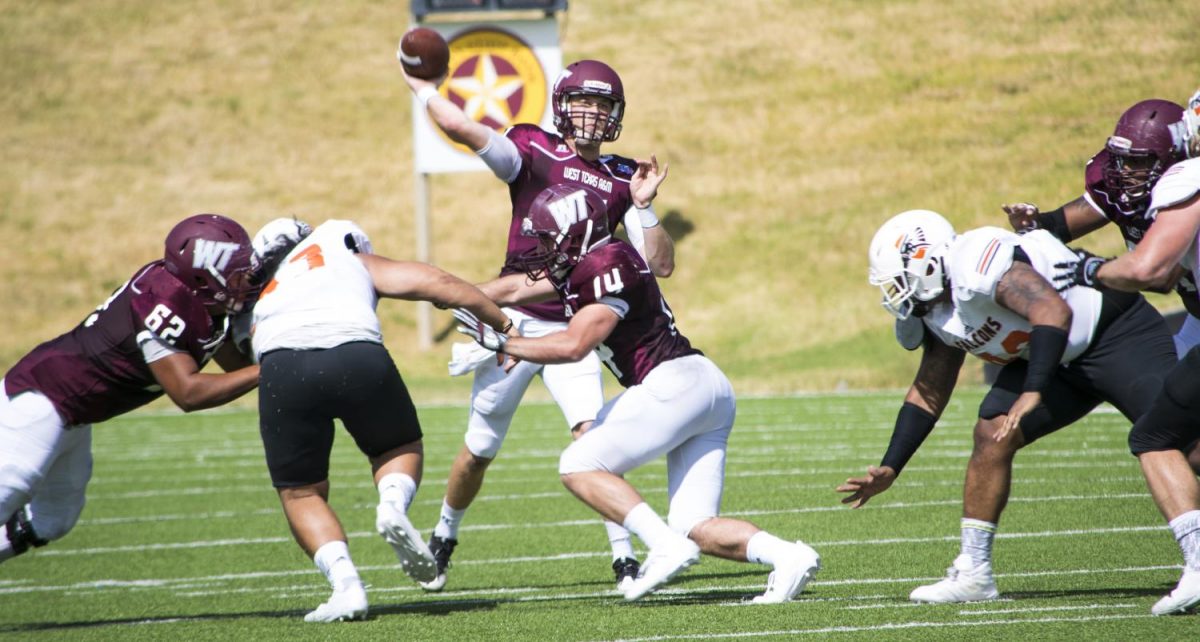 Most coaches say that a team sees the most improvement between week one and two.

After a first game heart-breaker against then 13th ranked Azusa Pacific, the Buffs pulled off a thrilling 24-21 victory over, then, seventh ranked Colorado State-Pueblo.

After back-to-back games against a top 15 opponent, it is no secret that WT has been tested already. Beating one of these perineal teams proves the Buffs can compete with the great teams. Head coach Hunter Hughes says the biggest improvement from week one to week two was the ability to finish and capitalize.

“Last week I thought we were close,” Hughes said. “I thought we did some good things and we just didn’t finish last week. This week we finished. We got some turnovers at the right time and turned the tide.”

One of the things Hughes has put emphasis on is how physical he wanted his defenses to be. Against two top 15 teams in the country, the defense has so far only allowed offense to score an average of 19 points. Thus, has been very solid to start the year. Senior linebacker Trevor Myklebust was one of the four Buffs who created one of four total turnovers against the Thunderwolves. Myklebust says the defense has been playing well as a unit.

“All of our stops and forced turnovers came from different guys,” Myklebust said. “We were all playing good as a unit so we are very excited about the defense.”

The offensive line was another big point of focus for this team’s identity. In fact, one of the team’s sayings have been “put it on the line with the offensive line”. Senior offensive lineman, Dillon Vaughn, says the progression is because of the coach’s constant emphasis on physicality and intensity.

“The entire time we have been here the coaches have harped on intensity and physicality,” Vaughn said. “They tell us to continue to push forward no matter the circumstance and I think we’ve learned from that the most in these last two weeks and to not let up on the gas and putting on more steam as coach says. We try to hit them harder and harder each time until they get tired and we don’t.”

With intensity and physicality, there is big competition. One of which has been with the quarterbacks. Redshirt freshman Justin Houghtaling was given the starting role before leaving the CSU Pueblo game with an undisclosed injury. Junior Ben Arbuckle was given the reigns then and helped finish a thrilling win over the seventh ranked Thunderwolves. Though Arbuckle has this competition in his mind, but he is more focused on helping the team win in conference play. A win over a top 10 team can do just that.

So far, the quick progression of the WT football team has been surprising to some people. The Buffs now prepare for their first road game, after a sluggish 17-6 win over UTPB. The biggest challenge to Hughes is getting his team to start strong as the Buffs have only scored 18 points combined so far in the first half. Though this is on Hughes’ mind he also says that why teams play two halves.

“I just tell the them it’s a 60-minute game,” Hughes said. “We got to play for 60 minutes. I think they understood that last week and we’re getting stronger in the second half. We got to start playing better in the first half. We just got to keep on getting stronger.”

WT will have a great chance to improve again as the they go on the road to Stephenville, Texas to face Tarleton State prior to hosting Eastern New Mexico in the annual Wagon Wheel game on Sept. 30.