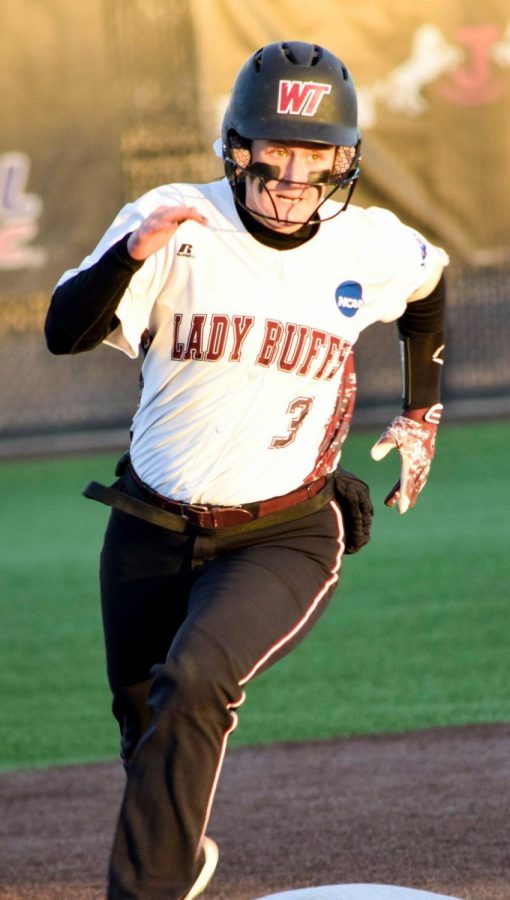 Ashley Hardin rounds second base during the game against Regis on Friday, Feb. 2 at Schaeffer Park.

Women’s Basketball
The No. 25 Lady Buffs scored 17 points before they were even contested by Permian Basin last Tuesday in Canyon, setting the tone for their 72-36 win. Statistically, sophomore Lexy Hightower made eight of the 13 shots she took, snagging 20 points for WT overall. Junior Tiana Parker led with nine rebounds, closely followed by fellow junior Tyesha Taylor at seven. Parker also had a big night with two blocks at the basket and tied with teammate Deleyah Harris (junior) with ten points.

The Lady Buffs grabbed another big advantage by leading Texas Women’s 22-8 after just the first quarter in Denton on Saturday. Parker showed up yet again with a clutch performance as she registered 15 points on the night by making seven of the eight shots she took. Senior Cece Wooten grabbed eight rebounds and provided two blocks for the Lady Buffs. WT will continue their road trip in Lawton, Okla. this Thursday at 5:30 against the Cameron Aggies.
Men’s Basketball
In a national top ten and an LSC top two matchup, the No. 10 Buffs definitely did not disappoint against the eighth-ranked UT Permian Basin last Tuesday, running away from the Falcons 105-86 in their 20th win of the season. Highlighting the night came the swish of a season-best 16 three point shots. Score leadership came from senior David Chavlovich’s 26, 21 of which came from a dominant second half. WT moves forward on their final six regular season games with a record of 20-2. Their next opportunity comes against Cameron on Thursday, Feb. 08.
Softball
The No. 13 Lady Buffs opened up their season going 3-0 at the WT Invitational, topping Augustana (S.D.) and Regis (Colo.) respectively.

Despite edging out Augustana on Thursday, the bats came out on Friday, plating 19 runs combned in the two games. Kylee Moore and Ashley Hardin each had walk-offs respectively on the opening day as both combined nine hits in the three games.

Baseball
The Buffs convincingly caught the win column to kick off their 2018 campaign against Colorado State- Pueblo on Friday 9-3 despite falling behind early 1-0. Junior Nick Guaragna went 2 for 5, scoring once and batting in three while junior Justice Nakagwa homered as he went 1 for 2 to score once and bat in two. Senior Ryan Larison tossed the win with a successful six-inning appearance against 23 batters, only allowing three hits, two walks, one earned run and taking six strikeouts.

On Saturday, the Buffs made it a streak in Pueblo, Colorado with a 7-4 win against Adams State. Highlighting this outing came junior Christian Loya as he scored two from a 3 for 5 performance and senior Nick Canas went three-for-three with three RBIs. The Buffs finished the game with 13 hits and zero errors, compared to Adams State’s nine hits and five errors.

WT had a miscue later Saturday against Colorado State- Pueblo, losing 5-12 due mostly to a seven run hiccup in the last three innings of the game. Junior Darin Cook took the loss as his five innings spanned six hits, four strikeouts, and five runs (four earned). The Buffs’ loss also comes thanks to the stranding of 12 runners, losing eight outs to double plays on offense.

The last game of the tournament was scheduled against Adams State on Sunday, but cold weather closed the door on that plan. The Buffs will take a shot at redemption against New Mexico Highlands in a three-game series in Canyon starting this Friday at 5:00 pm.