LGBTQ members speak out about community 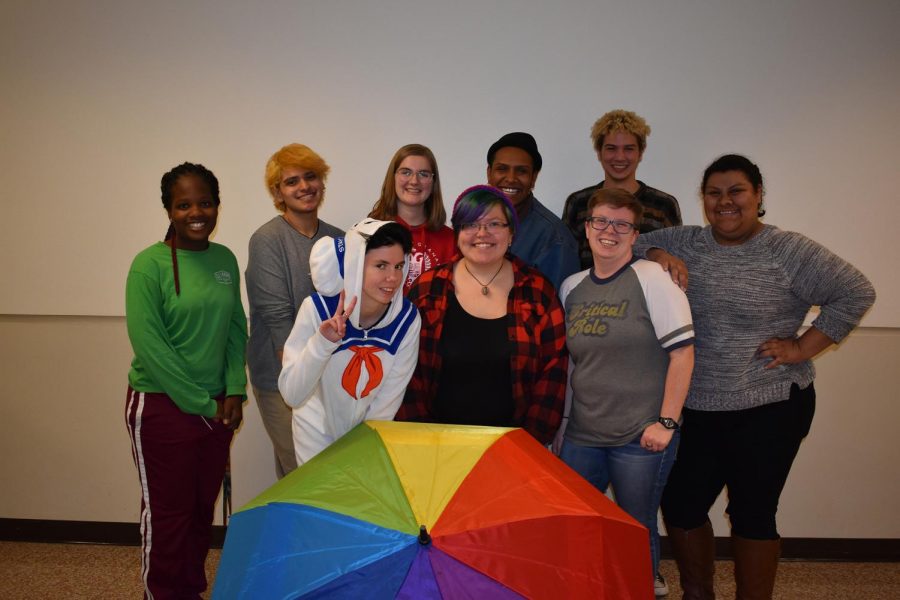 Members of Spectrum during one of their weekly meetings. Meetings are 7 p.m. Thursdays in the Classroom Center Room 335.

Spectrum, the gay-straight alliance on campus has been a leader in bringing awareness and acceptance into the campus community. Members of Spectrum push for the rights and liberties of the LGBTQ community across campus and elsewhere in the area. Coming out is a monumental point in time in many people’s lives. Many have felt tension and anxiety when coming out, but so many more are welcomed with open arms.

Senior Carolina Brea originally came to West Texas A&M University to be an equine industry and business major but chose English before the start of her freshman year.

“I also liked the size of WT,” Brea said, “and the fact that Palo Duro Canyon is very close.”

Brea identifies as bisexual and has felt accepted on campus and throughout the community. She is from Dallas and didn’t know what to expect coming to a smaller town, but she said she was pleasantly surprised.

“Of course there are still some places and people who aren’t as welcoming,” Brea said. “But I’ve found it easy to avoid negativity and focus on positive attitudes.”

Freshman Danny Abbott identifies as a bisexual and transgender. He said he’s lived in Canyon his entire life so West Texas A&M University was an easy choice to make.

“Though I was initially timid about staying home, I found a great support system at Spectrum WT,” Abbott said.

“I frankly don’t care if strangers accept me or not,” Abbott said. “Not everybody is going to accept who I am, but strangers aren’t important, friends and family are.”

Abbott feels accepted both on campus and in the community. He recently confided in a professor who was very open and accepting with him.

“Since we live in West Texas, there’s a certain expectation that not everybody has an open mind, but that’s simply not true,” Abbott said. “I just had to look in the right places for support.”

As far as politics goes, Abbott said he does feel some anxiety about the current political climate.

“A lot of people are standing up for their rights nowadays, including the LGBTQ community,” Abbott said, “as long as there are people willing to fight for LGBTQ rights, I don’t believe they can ever be completely taken away.”

“I was looking for a cheap art school,” Kaia said. “I wanted something that was completely different from where I’d grown up.”

Coming out, Kaia’s mother was the one who initially approached her about it. Kaia was originally skeptical about coming out to her father, because she was unsure how he would respond.

“My mother has been completely accepting,” Kaia said.

Kaia is definitely worried how the current political climate will affect her future. She worries about how certain laws could eliminate her rights as a transgender woman.

Kaia is part of a podcast called “Users Guide to ____”. Kaia started this podcast with fellow WTAMU student, Annie Godinez. She says the purpose of the podcast is to clear misconceptions and spread a message of knowledge and positivity. In regards to the current political climate, Kaia released a statement on the podcast regarding the current administration and what needs to be done in order to create change.

“Since then [the announcement of new laws] they’ve made moves to deconstruct the progress and the rights that we obtained during the Obama administration,” Kaia said. “It is our responsibility to use whatever platforms we have available to us.”

Spectrum’s goal is to create a community for people to come together and share their ideas and broaden the knowledge of the LGBTQ community.

“We are no different where it really matters,” Kaia said. “We’re all just trying to be happy in the way we see fit.”