Beyond the 9 to 5: beakers and brewskies 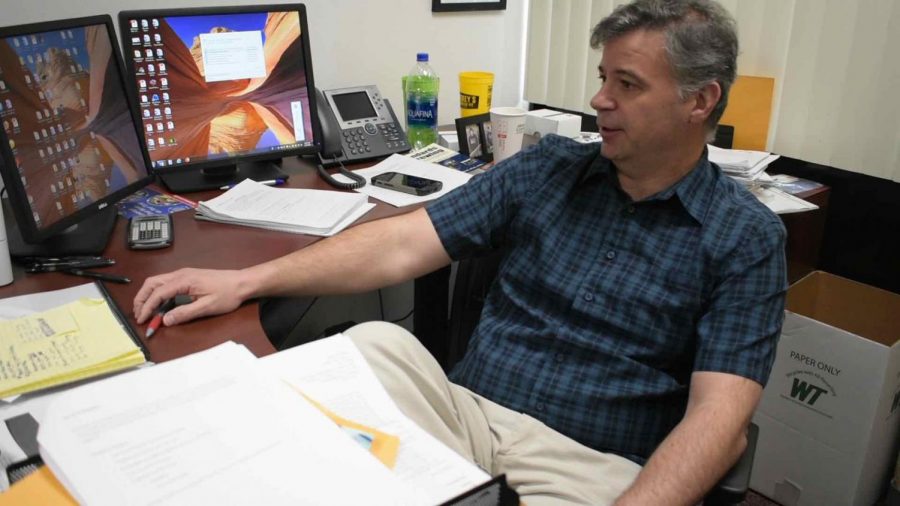 Esteban Ponce/the Prairie Biochemistry professor Dr Nick Flynn teaches at WTAMU and appreciates his hobby of homebrewing and the chemistry that goes into the practice.

Chemistry and brewing go hand in hand, and Dr. Nick Flynn, professor of biochemistry at West Texas A&M University participates in the hobby of homebrewing.

“As of 2017, there are an estimated 1.1 million homebrewers in the United States,” according to a nationally represented survey commissioned by the Homebrewers Association and can be viewed on their website. “Of those brewers, 68 percent have earned a college degree or some form of high education.”

Dr. Nick Flynn came to WTAMU in 2010 as part of what was then the Department of Mathematics Chemistry and Physics. Flynn was instrumental in getting mathematics split off into what is now Engineering Computer Science and Mathematics. When the split was made, Flynn decided to leave his position as the head of the department and drop back into faculty. Flynn is now a full-time professor of biochemistry and participates in different areas of research.

“Learning from Dr. Flynn was amazing, you could tell he is passionate about what he does, and he is willing to teach you everything he knows,” said James Welbaum, WTAMU alumni and current bioinformatics graduate student at Texas Tech.

Flynn teaches freshman chemistry and biochemistry II. He chooses to teach those courses because he enjoys teaching freshmen and the subjects as they are closely related to his field. Flynn also teaches an Education On Demand course available online to students about homebrewing.

“When I was doing research with him, he would always take the time to explain what we were doing, why we were doing it, and the best way to do it,” said Welbaum.

Flynn also participates in studies including those centering around fermentation sciences and another one being natural products like the formation of acrylamide fried starchy foods. The department recently had an article published in The Journal of Undergraduate Chemistry Research. An undergraduate study was conducted concerning bone broth and acrylamide formation and the impact it has on food safety and how foods are cooked.

In a true practice of chemistry, Flynn also participates in homebrewing and has done so for the past 10 years. He is the president of the Amarillo High Plains Drafters Homebrew club who recently held a competition judging viewership of homebrewers across the nation. Flynn submitted two beers for the competition and also started trying his hand at kegging.

“I really love that hobby because you get to meet some really interesting people from all different walks of life,” said Flynn. “You know and for some of them…somebody suggested that they try a beer and their world palate just finally opened up and they’re like ‘Wow. This is what beer really is supposed to taste like’, and so they pretty much felt fell in love with craft beer at that point in time.”

Members of the homebrew club include a trauma surgeon, a couple of graphic designers, I.T. workers, engineers, and a pharmacist. Flynn expressed that it’s really interesting to meet each and learn about every one of those people and find out how they migrated into homebrewing.

“I am certainly willing and ready and able to serve as a resource for people to put the breweries together,” said Flynn. “So I’m kind of excited about that that I can contribute to the growth of an industry that really is in its early stages particularly when you compare it to other areas.”

According to Flynn, the Amarillo area does not have the same number of breweries for a city its size. The brewing industry is lacking here and Flynn believes his and the brewing clubs efforts will impact Amarillo and grow the size of the industry.

Beyond the 9 to 5 is a series covering WTAMU faculty and their hobbies and interests outside of their academic duties.