The White Buffalo: restoring a piece of history 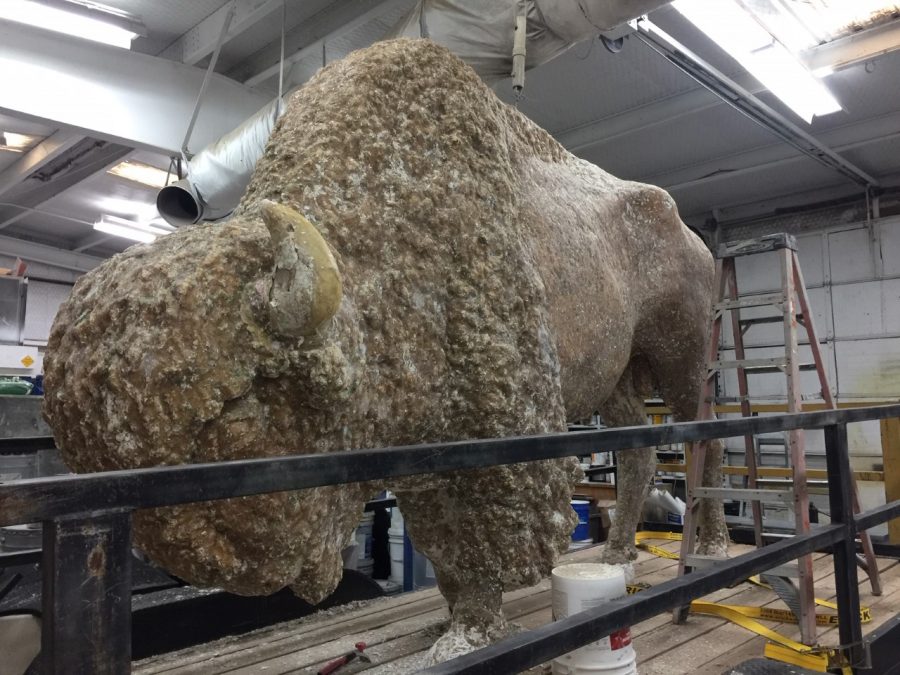 Photo provided by Becky Stogner The White Buffalo during the restorative process after layers of paint has been taken off. 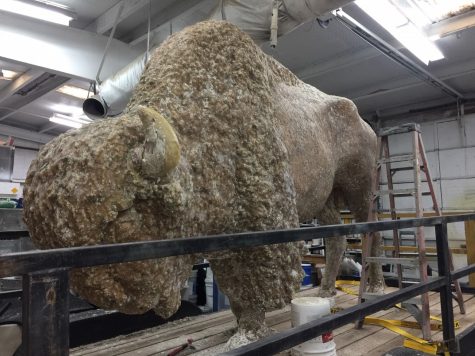 Photo provided by Becky StognerThe White Buffalo during the restorative process after layers of paint has been taken off.

A staple landmark for many West Texas A&M Buffalo fans, alumni and students will be making its way to the new stadium for the 2019 football season.

What is known as the White Buffalo has stood in front of the Kimbrough Memorial Stadium as an exhibition of the WTAMU stadium for viewers to see since 1968. To keep with history the White Buffalo will be placed at the south end of the new stadium along Russell Long Boulevard.

The buffalo has been removed from its place at Kimbrough and is currently being restored before being placed at the new stadium. Part of the restoration includes taking off the around 50 layers of paint that was on the buffalo.

“It had been shot quite a bit, there were several bullet holes in it, one of the horns was a little wonky. Mostly it was the paint, they took the paint off and it was 100 pounds of paint that came off the buffalo,” said Athletic Director Michael McBroom.

According to McBroom the buffalo began restorations weighing 1800 pounds and after the first week, it lost 100 pounds. The layers of paint came from opposing teams painting it and from general maintenance throughout the years. Throughout the moving and restorative process of the White Buffalo, a level of enthusiasm has risen from people who are excited about the new stadium.

“We sent an email last week to membership of the Alumni Association that showed some pictures of the restoration progress, showed it without the white paint on it, because it was 50 layers of paint or so, that showed some of that progress,” said Stogner. “The response that we got was ‘this is so cool’, ‘I am so excited’ it was a very positive response.”

One of the reasons why it was important to move the White Buffalo to the new stadium was to keep the tradition. The White Buffalo is a landmark that WTAMU officials hope students and alumni will recognize as a piece of the university’s history. For junior music education major Koby Solis, he attended every home game at Kimbrough this past year and is happy to know that apart of Kimbrough will live on.

“I truly believe that it’s in the universities best interest to move it as it’s something that we can integrate into this new stadium. It’s been with WT for so many years, it almost feels like not having it there would be such a loss for everyone,” said Solis. “Mixing traditions is important because we get more diversity, and a mix of the old and new is exactly what college is, so yes it’s important that it is moved so we can have this still be with WT for years to come.”

The White Buffalo stands at nine feet tall and 12 feet long. It will be placed on a three-foot platform where it will be lit throughout the year with the flag poles behind it. WTAMU officials also hope that moving the buffalo will allow it to become a landmark on campus for pictures.

“It will be impressive because everyone is used to seeing it from a few hundred feet away and so it’s going to look a little larger than life,” said Stogner.

A formal dedication is planned for when the White Buffalo is officially placed in its new location. The space will be named after the lead donor from the project. The ceremony will also include the Lambda Chi alumni organization who helped raise money for the project and the son of the original artist Jack King Hill.