Buffs aim for the perfect shot at Nationals

Typically, when someone thinks of sports teams at West Texas A&M, football, basketball, and baseball are the first types of sports to come to mind. However, there are countless sports teams on campus that compete and work just hard that many students don’t know about. One of those teams being the Trap and Skeet Team. 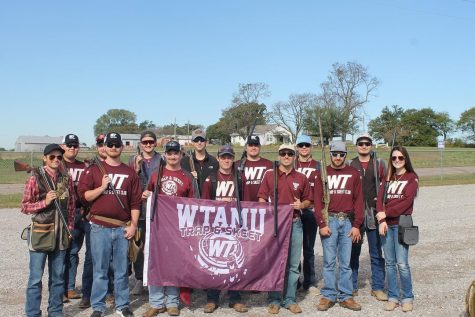 Photo Courtesy of the Trap and Skeet Team.

“Basically [we are] a shotgun sport team. We travel where we can to compete in collegiate shoots and try to get our name out there,” said senior, animal science major and Trap and Skeet President Jeremy Buehner. “We go out and we shoot competitively against some of the greatest schools in the nation,” said junior, environmental science major and Vice President Dallen Skinner.

The team has traveled to many different states such as Kansas, Illinois, and Nebraska to compete. Some main events within the sport include Trap, Skeet, Sporting clays and Five Stand shooting. Though the team takes the sport and competition seriously, they also spend time bonding.

“Occasionally we all get together on a weekend and hang out and get to know each other better, that way we’re a close knit group of people not just a bunch of random guys,” said Skinner. “Outside of just shooting, we have a good time going out and practicing. Occasionally we’ll go out to the Amarillo Gun Club or Hereford when we’re not practicing and we still go shoot, that’s what we like to do.”

The team requires students to acquire and maintain at least a 2.0 GPA in order to compete and accepts students with any and every level of experience.

“We all have our own experience so we’ll help each other out if someone is having trouble with any discipline or haven’t shot before,” said junior, agriculture and economics major, and Secretary Wyatt Clark.

The Trap and Skeet team will take a group of five to compete at Nationals from March 25 to 30 in San Antonio, Texas to test their skills against various other competitors from around the nation.

“Nationals is a big collegiate shoot that’s hosted once a year in San Antonio, Texas. There will be over 4,000 participants and it’s just a good way to get our name out there and it’s an opportunity for us to bring back some hardware,” said Buehner. “In the future, if we have the funds we would consider taking two teams, if we had enough members and were able to get enough fundraising done,” said Clark.

Each member of the Trap and Skeet team has grown up with some sort of shooting experience and viewed the team as a great opportunity.

“I always enjoyed the sport and when I came to college I noticed the school had a Trap and Skeet club and decided that was something I definitely wanted to join and be a part of,” said Clark. “I fell in love with it and turned out to be pretty good at it. When I got here and had the chance to do it and met this group of guys, it just turned out to be where I fit in,” said Skinner.

If students are interested in joining the team, they can contact the club through BuffLink or get information through Recreational Sports. The team tends to put up flyers around campus as well to promote their events. Students can also attend the meetings the team has every Monday that take place in the Natural Sciences Building, in room 101 at 8:00 pm.

“As a team, we’re really here to help each other out in any way we can. We try to have team bonding where we just get together, get to know the members and have fun…we practice a lot, fundraise together. Really it’s not a team, it’s a family,” said Buehner.