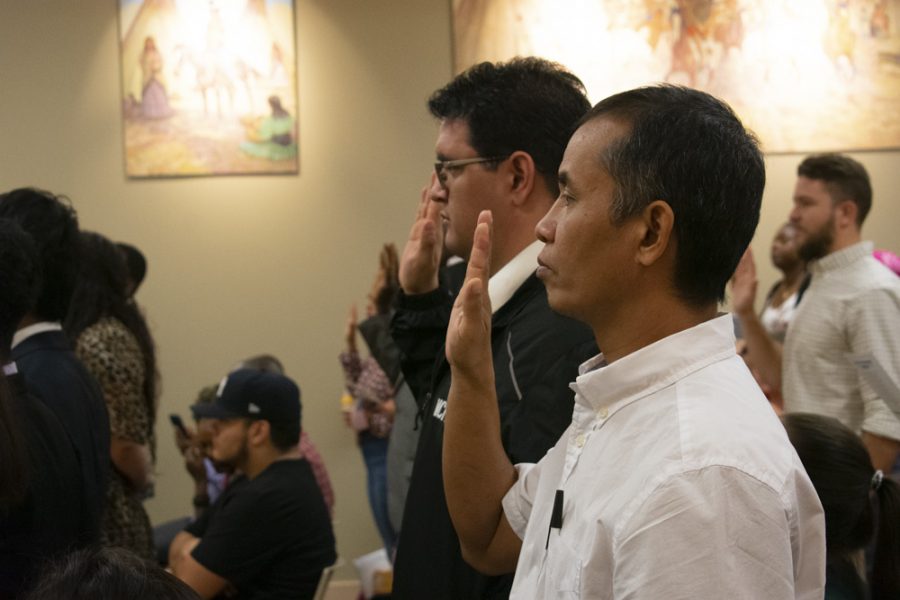 The ceremony took place at the Panhandle-Plains Historical Museum

A Naturalization Ceremony took place at the Panhandle-Plains Historical Museum’s  Hazelwood Lecture Hall on this past week, culminating the naturalization process for more than 71 individuals from 19 countries.

“For anyone you know that may be thinking about it [going through the naturalization process] or putting it off, go ahead and do it because it is a long process. There’s a lot of documents, a lot of stuff involved. But once you’ve gone through and you’ve been through the ceremony, it’s such a great, such a happy…such a proud moment,” Patricio Navarrete Jr., newly sworn citizen sworn-in citizen, said.

“It’s kind of emotional, but I love it. This is one of the best parts of being an immigration officer,” Robyn Wilkerson, immigration services officer said. “To become a citizen of the United States is very important to some people, they still have relatives in foreign countries, they wouldn’t be able to petition for otherwise.”

During the ceremony, there was a presentation on rights and responsibilities of citizens, recitation of the Pledge of Allegiance and the taking of the oath of allegiance. A distribution of naturalization certificates followed the next step for the new American Citizens is registering to vote.

“A permanent resident has all the rights of a citizen except they can’t vote,” Wilkerson said. “Sometimes they can apply for government jobs, federal government jobs, but they have all the other rights”

“It’s so significant because this is the history of the region, and they become part of the region and they’re part of our history and it’s a historic day for them,” Carol Lovelady, executive director of the Panhandle-Plains Historical Museum, said.

According to Lovelady, the naturalization ceremonies have been taking place for longer than three years at the PPHM. Becoming a citizen also brings more perks.

“We’re just thrilled, we give them a gift so they can come back in this community,” said Lovelady.

Becoming a U.S. citizen is truly a momentous occasion. It is an accomplishment for all involved. Whether big or small, family and friends who attended the ceremony all had a part in this process.