Incoming students learn the basics of being a buff 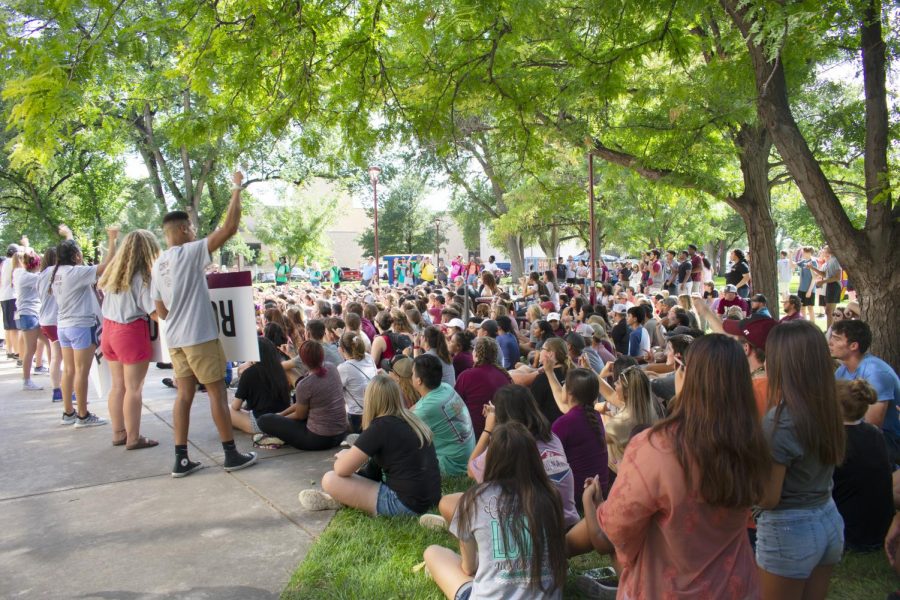 Buff Branding ceremony commences with spirit rally teaching the incoming freshmen the basics of being an active Buff. Aug. 23, 2019.

As another semester begins, a slew of new baby buffs have made their way to West Texas A&M’s campus. Along with them are several upperclassmen that are returning to start a new year.

“I chose WT because it is close to home. I would go to WT a lot when I was younger because my mom graduated from here,” said Jeneva Bravo, freshman, nursing major.

As the first week of school began, various events on campus were held. One prominent event that takes place prior to the start of the semester is Buff Branding. Buff Branding was 3-day event that was held for incoming freshmen and transfer students. Students also have the option of becoming Buff Leaders who lead the different groups during the Buff Branding activities.

“Working with them and just seeing how, like energetic they were about WT and everything and made me realize like, you know, there are some good parts about WT and if they can be really happy about it, so can I,” said Mia Davis, sophomore, pre-vet major.

Though there are many new freshmen on campus, there are also a number of transfer students that are starting their first semester at WT as well.

“The experience at of Buff Branding was different. The interaction between the students between the students was hard due to having already gone to college for a year or so,” said Sam Spoll, sophomore, marketing major. “Transitioning from the small private college I was at, moving to WT was an eye opening experience,” said Spoll.

Buff Branding isn’t the only welcome event that occurred on campus. Various organizations and groups around campus host a number of events to welcome and recruit students as well as  encourage them to be more involved and become a part of the campus community.

“I really enjoyed the free lunches that were provided around campus.” said Bravo.

Returning students have also prepared for their upcoming classes for the semester.

“It feels great. I feel definitely feel way better mentally coming back than I did last year.

Whether a student is returning for another semester on campus or walking the sidewalks of WT for the very first time, they are considered a part of the campus community and play a part in buff family.

“The community WT upholds is very comforting. Everyone is nice and helpful with any questions that I may have,” said Spoll.