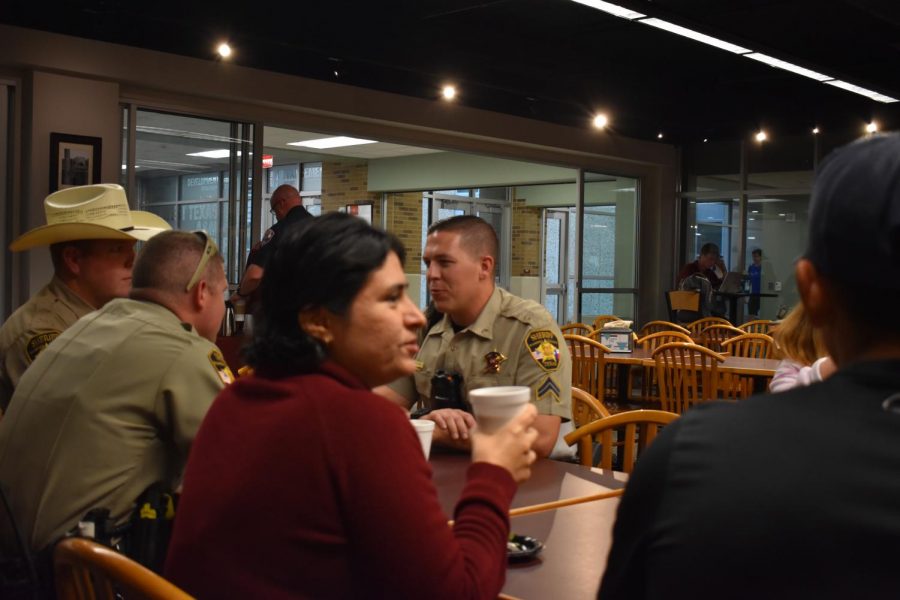 The West Texas A&M University Police Department hosted “Coffee with a Cop” in the Jack B. Kelly Legends Club on Oct. 2 from 9:30 to 11:00 am. For this annual, nationwide university event, police officers from the UPD, as well as the Canyon Police Department and officers from the Randall County Sheriff’s Office made themselves available for anyone’s conversation. With coffee and a fruit breakfast provided by Aramark, the Legends Club became a welcoming environment for everyone who wanted to ask questions or get to know their law enforcement.

“This is what we call community policing,” said Corporal Rick Cash of the Canyon PD and a WT Alumni. “Dialogue with the citizens, getting to know people, especially the students… We’re humans, you know, even though we may arrest people or take them to jail, write tickets, we’re also here to help… We have a heartbeat, too.”

The assistant chief of the UPD, Robert Bird was in charge of the event. He sat with a coffee and his officers and awaited curious students.

“It’s just a chance for the public and the police to get together under a non-adversarial setting,” Bird said. “Come and visit, ask any questions you’ve got. Whatever you want to know… We don’t care who. It’s open to everybody.”

When asked what questions he would like to be asked, Bird said, “I hope they ask something that’s on their mind that they don’t really know or they want to find out our perspective on. A common question that we get asked a lot because we’re university police is, ‘can you stop someone in the city?’ or ‘can you stop someone out in the canyon?’ And the answer to that is yes… We have jurisdiction anywhere Texas A&M owns property.”

“Just anything,” Cash said, when asked the same question. “Anything that they might be struggling with or they might want to know about… If they’re worried about something, if they feel uncomfortable with police. Let’s talk about it. Or if they… want to be in law enforcement. Ask me a million questions about that.”

“I know I’m asking some questions,” Bird said. “I want to know what you think of the game day parking situation. We didn’t make the rules. But we have to… enforce those rules. And I want to get a lot of the students’ opinion on that. Because I think it could definitely be… revamped or tweaked.”

The event was planned to end at 11. But police officers stayed in the Legends Club for a while after that. They bought lunch and sat back down to continue their conversations. Several people came and greeted the officers as friends, knew them by name, and started conversations about their personal lives. Literature was discussed, as well as the legality of the combination of cinnamon rolls and chili, and the importance of this event.

“A lot of people don’t understand… what they do, necessarily,” Dalanie Underwood, a sociology major and a sophomore at WTAMU, said, referring to the police officers. “I feel like it gives an opportunity to students… to kind of get to know them and build those relationships. And to be able to… understand that they’re people that you can trust… They’re not here to get you in trouble. They’re here to… help you.”