Why Americans should ‘Remember, remember, the fifth of November” 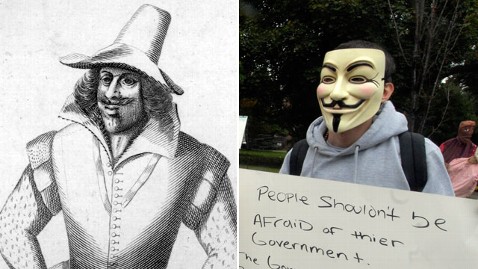 V’s poem in “V for Vendetta,” his plot to ignite a revolution in a dystopian future, and his mask are all based on a man named Guy Fawkes and a year-long conspiracy that later became known as the Gunpowder Plot.

In 1604, when King James I outlawed Catholicism in England, a group of Catholic rebels hatched a plot to destroy the Houses of Parliament using kegs of gunpowder. The figurehead and most radical member of the rebels was Guido Fawkes, an Englishman who allegedly believed King James I was a heretic to the Catholic church. Fawkes worked as a caretaker to a cellar below the House of Lords, the upper echelon of Parliament, where the rebels began hoarding gunpowder in preparation of their Nov. 5, 1605 plan to kill James I, his eldest son, and all of Parliament. These plans were dashed due to an anonymous letter sent to Parliament on Oct. 26, and all conspirators were captured and sentenced to death.

Nov. 5 is marked in the United Kingdom and throughout many of its former colonies as Guy Fawkes Day or Bonfire Night, and is celebrated nationwide with fireworks, bonfires and burning effigies or “Guys.”

Bonfire Night, or “Pope Day” as it was called in the American colonies, was celebrated by early Americans well into the 18th century, with horned and disfigured effigies of the Pope being burned by Protestant American colonists. It wasn’t until Halloween began to grow in popularity that Nov. 5 fell from popularity as a recognized holiday in America.

Guy Fawkes and his anti-oppression views continue to be topical in today’s international political climate. Freedom of speech and religion are infringed upon more often every day by politicians around the world. Various organizations have sprung up to combat these actions, including Anonymous, a hacker group that ABC News describes as “an amorphous group of people that can include anyone that wants to use their brand to put forth their cause.”

Anonymous became a household term during the 2011 Occupy Wall Street protests, in which individuals identifying with the group wore Guy Fawkes masks to honor his sacrifice for freedom and protest against oppression. Anonymous spent most of the 2010s hacking politicians and Klu Klux Klan members, and their use of Guy Fawkes’s image has led to his mask coming back into the public eye.

Guy Fawkes masks are now commonly seen at protests around the world, particularly protests against oppressive financial and political ideologies. Most recently, Guy Fawkes has been seen adorning the faces of protesters in Hong Kong after China celebrated 70 years of communism. Protesters interviewed commented on the “anti-totalitarian” message of the “V for Vendetta” movie and stated that it related to citizens’ ongoing battles against police and communism in Hong Kong.

Guy Fawkes’s legend and legacy live on around the world in the mind of those who celebrate his failure and those who don his image to join him in protest against oppression. Despite most Americans not knowing him by name, his face and his ideas remain poignant and present in the United States.