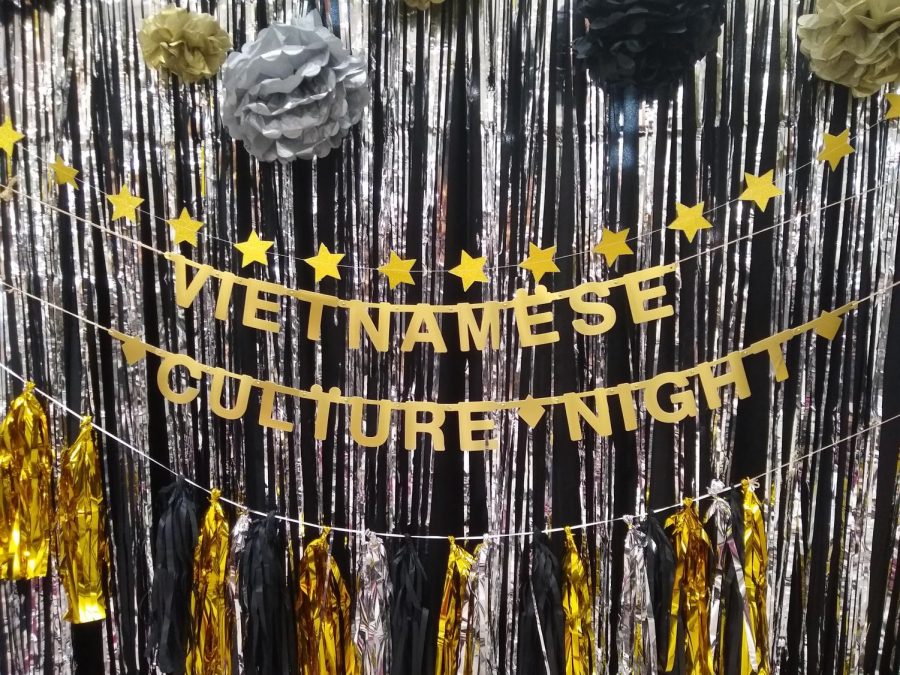 The evening began at 7 p.m. with a buffet offering attendees a wide variety of traditional Vietnamese cuisine. Legacy Hall was lit up red to evoke the Vietnamese flag. Students dressed in colorful, traditional garb could be seen serving food and visiting with friends. And after an hour of eating, talking and a looped travel video showing off the beauty of the Vietnamese people and their country, the students behind the event began their performances.

The first performance was a dance to a contemporary Vietnamese pop song done in traditionalistic fashion. Following this, the VSA had their advisors Dr. Robin Clark and Dr. John Francois from the college of business come up on stage and receive a special thanks for their efforts. Both professors expressed their pride in the students who had planned and executed the event, and Francois encouraged everyone present to continue to seek out multicultural experiences and groups at WTAMU. His takeaway from his participation in the VSA is that events such as the Vietnamese Culture Night are not only beneficial to the Vietnamese students, but to all the international students who may not be represented or acknowledged.

After this, a local musician took the stage and sang “Tennessee Whiskey”, there was another dance to a contemporary song, the audience played a game of Kahoot with Vietnamese trivia questions, the WTAMU K-Pop dance team performed to the song “Kill This Love” and a live rendition of “Cha Gia Roi Dung Khong” was sung by one of the VSA members.

And after a behind the scenes video was shown to thank all who had participated in creating the night’s experiences, there was an elaborate fashion show. VSA members took the stage to show off traditional and modernized cultural attire.

“The intent of this night is to just show WT that ‘hey we are here’,” said Mery Hy, a senior biology and chemistry double major, and the president of the Vietnamese Student Association. “I think the show was great… As long as the performers have fun and the audience has fun, then that is all that matters.” Along with planning and overseeing the evening’s activities, Hy also participated in each dance routine and co-hosted the event. “We actually started planning the show like two months ago with the dances,” Hy said. “So, we’ve been practicing the dances… for a total of eight weeks now.”

“My main takeaway is very positive,” said Zach Cruz, a senior chemistry major, Mery’s co-host and self-imposed comedic relief. “I think a lot of people showed up with the intent of, honestly, just eating the food, but they stuck around; they got to experience the culture a little bit. Even myself, seeing the dances and everything, and art… expressing the problems in Vietnam. It’s very great, so I feel more cultured. It’s a blessing.” Cruz greeted people as they entered Legacy Hall wearing an ao dai, a traditional Vietnamese outfit worn by men and women for special events. Cruz himself is not part of the VSA, but is now thinking about joining.

“I think it was a really, really fun and great experience,” Haven Jock, a senior library sciences major, said. “And it was fantastic that they got to put in so much hard work to present something so… culturally in-depth to us and give us a piece of their culture.”