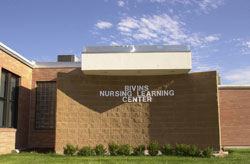 West Texas A&M University’s president Walter Wendler announced Tuesday that the Department of Nursing would be relocating to the university’s Amarillo campus by fall of 2021.

Wendler made the announcement at Amarillo’s regularly scheduled city council meeting, stating that he anticipates over 250 students, 20 faculty and staff, and the Dean’s office to occupy the completed Harrington Academic Hall at the Amarillo Center.

“We’ve struggled to find the financial resources to move our nursing program downtown,” Wendler said. Now, however, $6 million has been allocated to the plan, and Wendler said that the Harrington Academic Hall will be “without an empty spot in the whole thing.”

Wendler emphasized in his announcement the success of WTAMU’s nursing program.

“We’re in the top five in terms of pass rates while in the bottom five in BSN program costs,” Wendler said. He added that the move would make the program closer to healthcare providers.

Priscella Correa, an instructor of the nursing department, is excited for the benefits the move will bring to the program.

“For my course in population and community health, the area where we focus on delivering care is in Amarillo,” Correa said. “It will be beneficial for us to be embedded in the community where we service.”

Dr. Collette Loftin stated that she does not anticipate the move having a negative impact on the nursing students. “The students that would be impacted by this already travel to Amarillo for their clinical coursework,” Loftin said in regards to concerns about students who lack transportation.

While there is concern both from faculty and students regarding a lessened integration on campus due to the nursing program leaving Canyon, Loftin said the department and the university would combat that. “They have organizations that they work with; obviously we’ll still do flu shot clinics and things like that on campus,” Loftin said. “Those are very important to us.”

“Ultimately, it really doesn’t change much in terms of travel,” Correa said.

Jada Lee, a junior in the nursing program, share Correa and Loftin’s enthusiasm for the move. “I think it is going to positively impact the program and hopefully allow for growth in the number of accepted nursing students,” Lee said. She added that she also looked forward to future students having the opportunity to experience the program in such a central location.

“This is what we’ve all been wanting and now it’s finally happening. That’s exciting!” Lee said.

Senior Autumn McNath has mixed emotions about the move. “All of our equipment is old, the building is run down, and we do our clinicals in Amarillo, so it would be nice to be closer to the hospitals,” McNath said, before expressing her concerns about the change it would prompt both in the program and the university as a whole.

“That could really alienate the program. People would stop living in Canyon, they would live in Amarillo because that’s more convenient,” McNath said. “What if you’re in a class in Amarillo and you need to go to student med and you can’t drive all the way down here? Or what if you need to make a payment in the business office?” McNath said she is afraid that smaller issues like that have not been fully thought through, but “once they get resolved, it will be a great opportunity moving forward.”

The move will undoubtedly cause a shift in the dynamics of the nursing program and life on WT’s Canyon campus, and only time will tell the extent of the impact. The transition over the next few years will undoubtedly bring new and exciting things to the WT community and the Amarillo area.