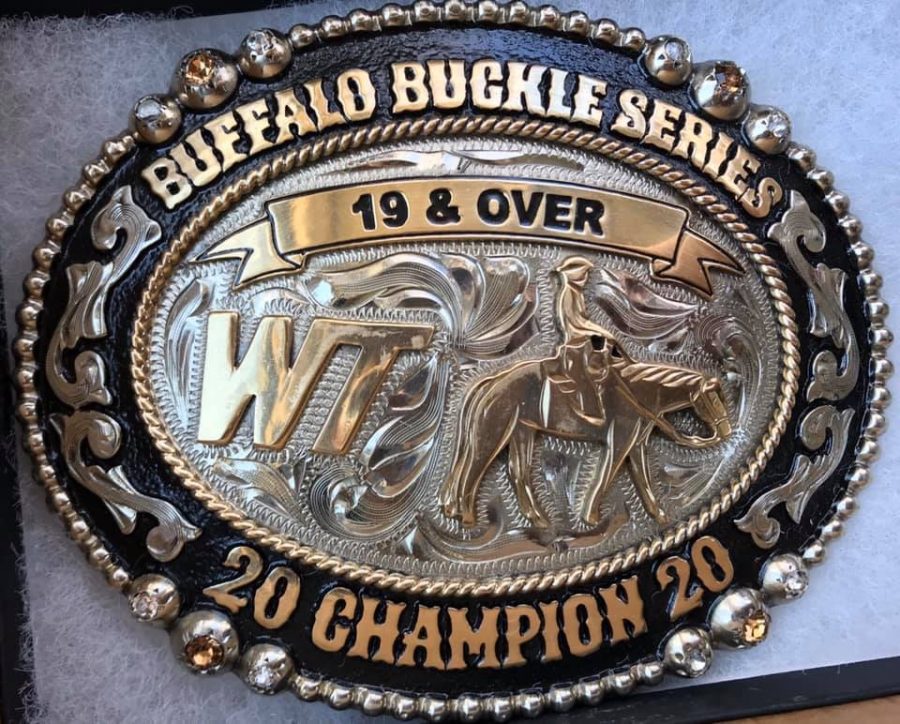 Courtesy WTAMU Buffalo Buckle Series Facebook Page/The buckle that will be awarded to the high point rider for the 19 & Over division.

West Texas A&M University’s agriculture students are no strangers to creating new and enterprising projects for the Canyon community. The most recent endeavor is a series of horse shows held at the WTAMU Horse Center.
Sophomore equine business and industry major Reilly Dhaliwal is the lead organizer of the WTAMU Buffalo Buckle Series. For most, being an organizer of horse events is a full time job, or at least one that falls closely in line with their normal work in the industry\; Dhaliwal organized the five show series while being a full-time student and a competing member of the university’s equestrian team.
“We’ve been really lucky to find a group of volunteers that were passionate and excited about being involved,” Dhaliwal said, adding that the support the series has received from both the volunteers and the community has helped keep her workload manageable.
“The university and advisors have been extremely supportive and helpful,” Dhaliwal added. “[They] were so supportive and excited about the future of the event.”
Dhaliwal and her former partner Emma Widener, who has since left WTAMU, had the idea to create a show series after attending a show put on by the Block and Bridle Club. The pair researched other equestrian events in the area and were surprised to find the Panhandle area seriously lacking.
“There wasn’t really anything like what we were wanting to do,” Dhaliwal said.
The Buffalo Buckle Series is an open, all-around horse show. That means that there are events, or ‘classes,’ for all age groups in both English—think foxhunting and Queen Elizabeth—and Western disciplines. While the Texas Panhandle does play host to rodeos, barrel races, and most notably the Working Ranch Cowboys Association World Championship show, there is little to no opportunities for equestrians to compete in an all-around setting, or for younger children to have their first show in a safe and fun environment with relatively low stakes.
Dhaliwal said the pair wanted to inspire a sense of community in the area most of all.
“Emma and I both started as 4H kids and worked our way up to showing at national level breed shows,” Dhaliwal explained. “We wanted to stay involved and give back to a program that really impacted both of us so positively.”
Dhaliwal emphasized the goal of giving back by explaining the benefit of the show’s profits.
“After meeting with the advisors, another goal that was developed was the idea of establishing a scholarship endowment that would go towards helping WT ag students fund their education,” Dhaliwal said. “We didn’t want this show to be profit generating for any specific club on campus because we really wanted it to promote a better sense of community and teamwork. The idea of the profit going towards a scholarship really fell in line with that.”
With an entry fee of $10 per round, plus a $10 office fee, the Buffalo Buckle Series is an attractive and affordable show option for equestrians in the Canyon area. The most recent show of the series brought 30 exhibitors and provided roughly $1000 in profits to the scholarship endowment.
The culmination of the series will be a belt buckle sponsored by HF&C Feeds and Guynn Training Center. According to the WTAMU Buffalo Buckle Series Facebook page, there will be buckles for the riders in each division who have scored the most points throughout the series.

Sophomore advertising and public relations major Stefanie Wilt expressed her excitement at the prospect of receiving an award for her work across the disciplines.
“We’ve both come so far in our training,” Wilt said, referring to her four-year-old mount Earthas Smart Move. “This series has been a great way to double check that. [Earthas Smart Move] is an amazing horse and we’ve both worked so hard to show everyone how amazing she can be.”
Wilt currently sits as the high-point rider of the 19 and over Walk-Trot division and anticipates receiving the buckle for her all-around performance.
The final show of the 2019-2020 series will be held Saturday, February 8th at the WT Horse Center with the gates opening at 7 AM.