Lord of the Super Bowl Rings 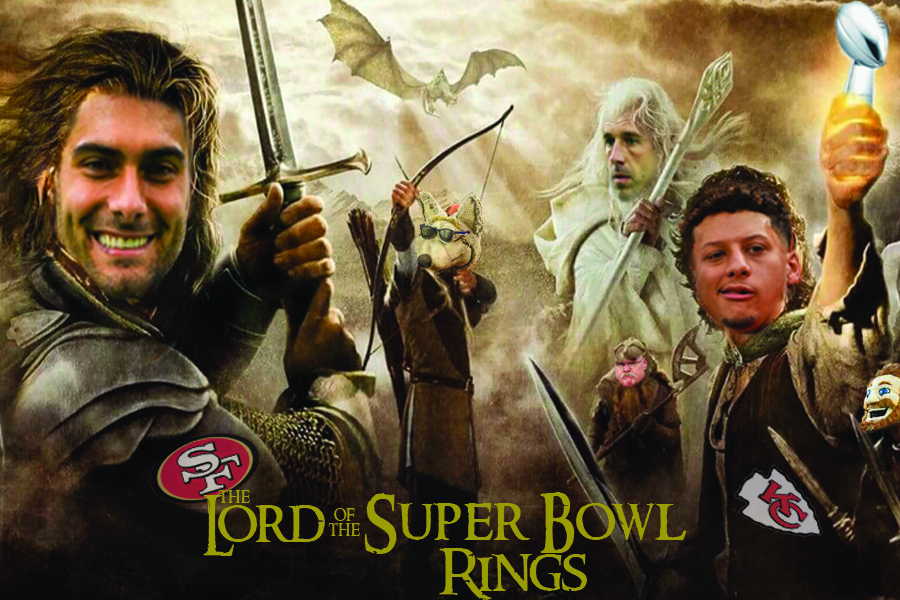 Members of the 49ers and Chiefs football teams.

Sept. 5. The beginning of the 100th NFL season. The journey that all 32 teams must face is a hard-fought 17 weeks of heartbreak and disappointment. What does it take to make it to the promised land? The end goal of all professional football teams: the Super Bowl.

The beloved rings that bind these teams to their fate. These teams, the players, coaches, and fans embark on a 17 week-long journey, but only two will reach their destination.

Whoever wins, this season has been full of memorable, inspiring and strange moments.

With the Super Bowl weeks away, let’s look back on the journey that each of the 12 teams faced in their season.

We’ll start with the AFC. In our wild card game, we had the Buffalo Bills, and the AFC South champs Houston Texans. The Texans sported a 10-6 record to the Bills’ 10-6. On paper, the Bills were the favorite, but the Texans would prove otherwise and clinch a close victory, 19-22.

The next wild card game was between the (defending Super Bowl champions) AFC East champs New England Patriots, and the Tennessee Titans. The Titans entered the game with a turn around season, as their starting quarterback, Ryan Tannehill, took over for Marcus Mariota mid-season. They came into the game with a 9-7 record to the Patriots’ 12-4. To everyone’s surprise, the Titans dominated the Patriots with Derrick Henry running all over the Patriots’ defense. New England didn’t have an answer, and Tom Brady, uncharacteristically, failed to connect with many of his receivers. The Titans would go on to win 20-13.

Now for the NFC. The 10-6 Minnesota Vikings took on the 13-3 NFC South champs New Orleans Saints. The Vikings would go on again to upset the Saints in the playoffs race and win, 26-20.
Then, the 11-5 Seattle Seahawks faced the 9-7 NFC East champs, Philadelphia Eagles. This game wasn’t close. At all. The Seahawks advanced after a dominant 17-9 victory.

After the wild card teams are set, now comes the divisional rounds. Rapid-fire round to sum up the games.

With the NFC, the Titans continue their shocking conquest as they upset the AFC North champs, Baltimore Ravens, 28-12. Houston has a problem with the AFC West champs, Kansas City Chiefs, as they fall 51-31. Now for the NFC. Skol no more as the Vikings fall to the NFC West Champs, San Francisco 49ers, 27-10. Then, the Seahawks fly home after a controversial 4th down call that would elevate the NFC North champs, Green Bay Packers, win 28-23.

It comes down to these four teams. Who will win and go on to Super Bowl LIV?

Who will win? Who do you think? Comment your predictions and make sure to follow The Prairie News for further updates.