The curious case of the empty bleachers 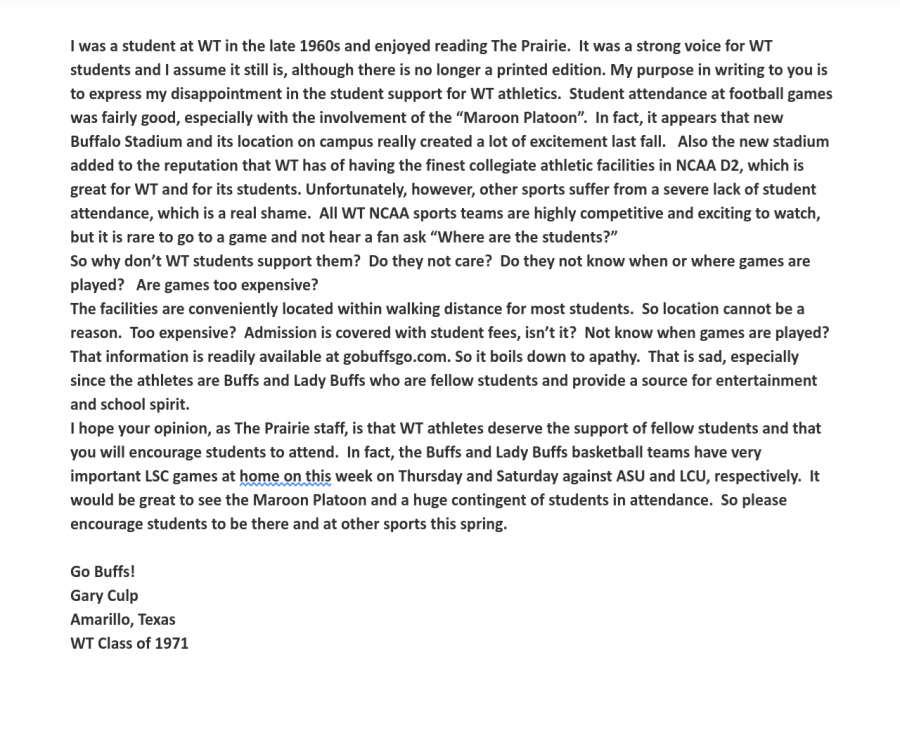 A letter by Gary Culp.

Whether you’re loudly cheering on the Buffs to a victory at the First United Bank Center or lightly clapping after a good shot by a member of the Lady Buff golf team, there seems to be a sport at West Texas A&M University for just about any type of fan. However recently, it has been brought to our attention that student attendance at various games has decreased.

After a letter was written to The Prairie News concerning the lack of students attending sporting events and it begs the question: why aren’t students going to games? Sure, some students don’t always have all the time in the world. Between classes, homework, jobs, campus involvement and maintaining a social life, going to the latest WTAMU game most likely isn’t the first thing on every student’s mind.

However, WTAMU is rooted in tradition. The rich school spirit is what encapsulates the very pride that makes WTAMU what it is today. As former buff alum Gary Culp highlighted, students get into all games for free, so pricing should never be a problem. Nor should distance of the game venues with them all being either on or close to campus.

To go along with these points, the teams at WTAMU create an enthusiastic and exhilarating environment for students and audience members whether it’s on the field, on the court or on the course. WTAMU athletes also work hard to play their best and have acquired a number of accomplishments that add to their impressive records and titles over the years.

The decrease in attendance couldn’t be blamed on lack of advertisement. There is a good chance that many WTAMU students have social media. WTAMU athletics and the various teams tend to post when there is a game day and encourage students to support and attend. Students also get emails sent to their buff email that encourage them to cheer on the Buffs at Buffalo Stadium and the First United Bank Center.

The points that Culp brought up and the concerns he has regarding the matter are something to really consider. Though it may not seem like it, when WTAMU students attend a game, they are becoming a part of history.

Every goal made or home run hit may seem like nothing in the moment. However, they attribute to something much bigger. Like Culp, supporting WTAMU athletics can create a number of significant memories and give the sense of campus community and pride not only for the students themselves but for the players, coaches, and other alumni.

With that, attending a WTAMU sporting event of any kind should be encouraged. If you’ve never been to a WTAMU game of any kind, it wouldn’t hurt to give it a try. If you’re an avid spectator of WTAMU sports, continue to show your support as much as possible and encourage friends and family to attend as well. WTAMU students have a  habit of saying “Go Buffs” every chance they get. Why not have the opportunity to say it loudly and proudly while rooting for the Buffs?

” I was a student at WT in the late 1960s and enjoyed reading The Prairie.  It was a strong voice for WT students and I assume it still is, although there is no longer a printed edition. My purpose in writing to you is to express my disappointment in the student support for WT athletics.  Student attendance at football games was fairly good, especially with the involvement of the “Maroon Platoon”. In fact, it appears that new Buffalo Stadium and its location on campus really created a lot of excitement last fall.   Also the new stadium added to the reputation that WT has of having the finest collegiate athletic facilities in NCAA D2, which is great for WT and for its students. Unfortunately, however, other sports suffer from a severe lack of student attendance, which is a real shame.  All WT NCAA sports teams are highly competitive and exciting to watch, but it is rare to go to a game and not hear a fan ask “Where are the students?”

So why don’t WT students support them?  Do they not care? Do they not know when or where games are played?   Are games too expensive?

The facilities are conveniently located within walking distance for most students.  So location cannot be a reason. Too expensive? Admission is covered with student fees, isn’t it?  Not know when games are played? That information is readily available at gobuffsgo.com. So it boils down to apathy.  That is sad, especially since the athletes are Buffs and Lady Buffs who are fellow students and provide a source for entertainment and school spirit.

I hope your opinion, as The Prairie staff, is that WT athletes deserve the support of fellow students and that you will encourage students to attend.  In fact, the Buffs and Lady Buffs basketball teams have very important LSC games at home on this week on Thursday and Saturday against ASU and LCU, respectively.  It would be great to see the Maroon Platoon and a huge contingent of students in attendance. So please encourage students to be there and at other sports this spring.”