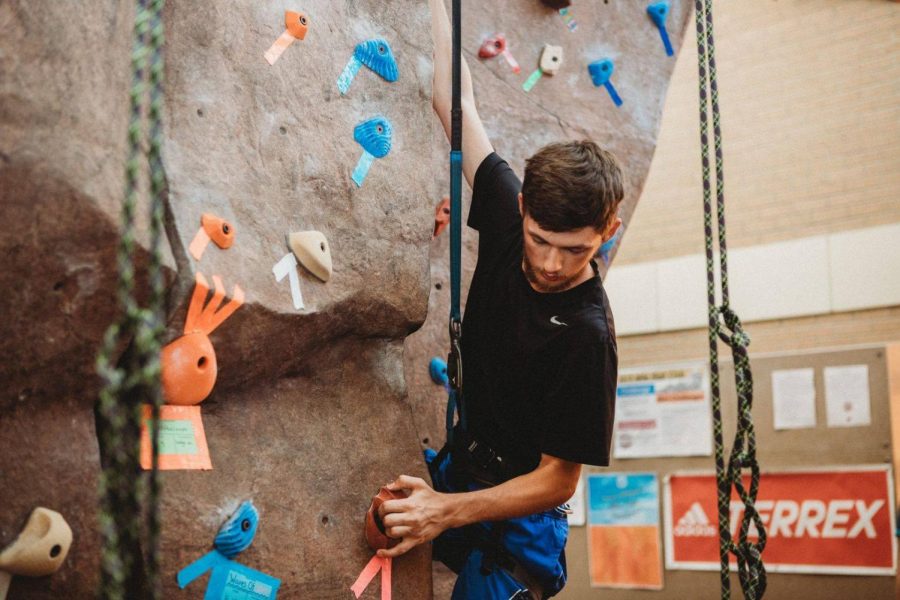 Any student who has visited the Virgil Henson Activities Center has probably seen the climbing tower. The looming structure is always surrounded by individuals in various stages of frustration and excitement, depending on how their climb is going, and students in maroon shirts call to passers-by to come climb.
The 2020 Olympic Games in Tokyo will be the first year that climbing will be officially included in the Olympics. Now is the perfect time to get involved in the sport, giving any potential fans plenty of time to understand climbing before the competition begins Aug. 5th, and West Texas A&M’s climbing tower is a prime location for both new and experienced climbers to practice their skills.
Senior biochemistry major Vishnu Ravisangar is an avid climber and has worked for WTAMU’s climbing tower for roughly 18 months. He explained that ‘the tower,’ as it is colloquially known, has several traits that set it apart from other climbing opportunities in the area.
“West Texas’s climbing tower is special in that it’s modeled after the Light House in Palo Duro Canyon,” Ravisangar said. “It’s also 42 feet tall, which is taller than most climbing areas around here, which is a huge benefit.”
Spencer Parton, a junior computer science major who also works at the tower, added that WTAMU’s tower is furnished with AutoBelays, which uses a magnetic braking system to gently and slowly lower climbers to the ground and catch them in the event of a fall.
Senior psychology major Jamee Bye said that her favorite part of WTAMU’s climbing tower is the bouldering, a form of climbing on lower walls without a rope that some consider a “superior” form of climbing.
“Bouldering doesn’t suck,” Bye added with a laugh.
In addition to the AutoBelay system and the bouldering areas, WTAMU’s tower provides classes on belaying and lead climbing. Ravisangar explained that lead climbing is when a climber climbs with their own rope and clips into the wall using specialized carabiners called “quick draws.”
Terra Perez, the director of WTAMU’s outdoor programs, gave more detail about the education provided by employees at the tower.
“Once you’ve learned how to climb and you’ve got the basics of getting up the wall, you can sign up for one of our belay clinics,” Perez said. “You just have to be able to get to the top a few times over, and then we kind of teach you the basics of how to belay on an ATC and a GriGri [belay devices].”
The consensus of everybody involved with WTAMU’s tower is that it is a fun and supportive environment. Ravisangar, Parton, Bye, and Perez all agreed that they love the atmosphere and the people who come climb.
“I love my job,” Perez said. “It’s working with students, and watching people grow and come to the wall and know nothing, then walk away and know everything. Watching those ‘aha’ moments and giving a community to students.”
WTAMU’s tower gives students a great opportunity to try out a brand-new Olympic sport in a safe and fun environment. The tower is open 4-10 p.m. Monday-Friday and 2-6 p.m. Saturday and Sunday.