The Prairie Pioneer seeks to spread the panhandle’s news 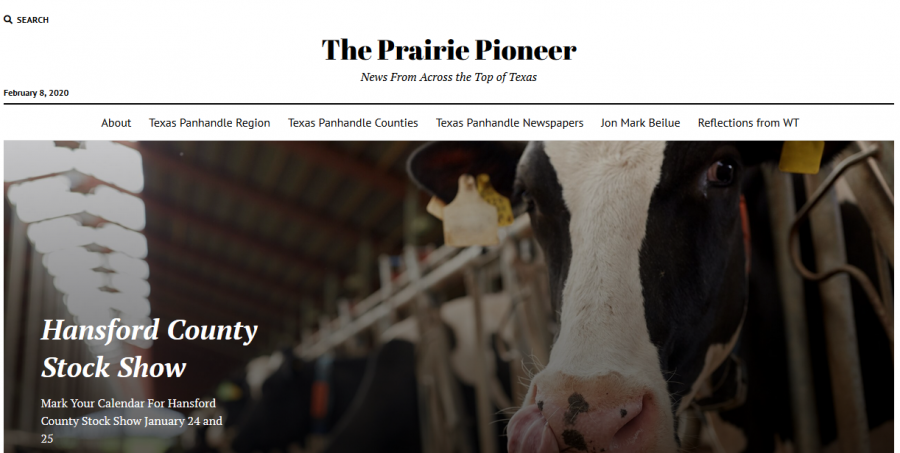 The Panhandle comprises 26 counties of the state of Texas. These counties house a plethora of cities and a vast array of small towns too numerous to count casually. It boasts the second largest canyon in the United States of America and accounts for a huge percentage of the cattle farms the consumers of the continent rely on for their meat and dairy. A unique and proud culture stretches from Dallum to Wall, accompanied and propagated by a variety of local and high school newspapers.

The happenings of these small towns or even the more obscure news from larger cities rarely circulate farther than the borders of the out-of-town ranches of the outskirts. This is where the Prairie Pioneer wishes to come into play. “Dr. Wendler’s vision for a news source for the Panhandle includes a news site that aggregates local stories from surrounding towns. In other words, the website would feature stories written for local newspapers but make them available at no cost to the general public,” said Dr. Trudy Hanson, head of the Department of Communication. “The site would also feature content from The Prairie News and articles written by Jon Mark Beilue. As part of fulfilling goals set for WT125, it’s important to Dr. Wendler that we serve the local area and share the accomplishments of area high school students.”

The website itself states: “Our mission is to bring you news from around the Texas Panhandle from all 26 counties.”

“Knowing that news organizations are trying to spread the news of small towns in the Texas panhandle gives me a sense of appreciation (…) There is a characteristic of a small town that is nowhere else to be found; the friendship of the people,” said Hannah Sell, a sophomore agriculture education major. “Most people that never experience a small town for themselves never understand the beauty of living in a small town. They don’t realize what they’re missing out on because they view it wrongly. Therefore, it is important to communicate with others what a small town looks like so that they will view it correctly. No, small towns are not for everyone; however, they should be viewed correctly out of respect rather than viewed as hick areas alongside […] the highway.”

Wendler would also like to feature local media outlets including radio stations in the Prairie Pioneer lineup. Already available on the website are podcast episodes featuring Randy Ray, director of broadcast engineering and associate lecturer of media communication, and Wendler himself.

The panhandle of Texas is vast and its peoples are scattered and independent. But the talent that arises here, the accomplishments made by its people, and the culture that has developed and continues to thrive and evolve is relevant, not only to the dwellers of the panhandle, but to Texas and the United States as a whole. The Pioneer is still in its infancy but already it offers a collection of stories that could help spread the actions of even the least known residents of the smallest county to places they could never have imagined.