What does the fox read? 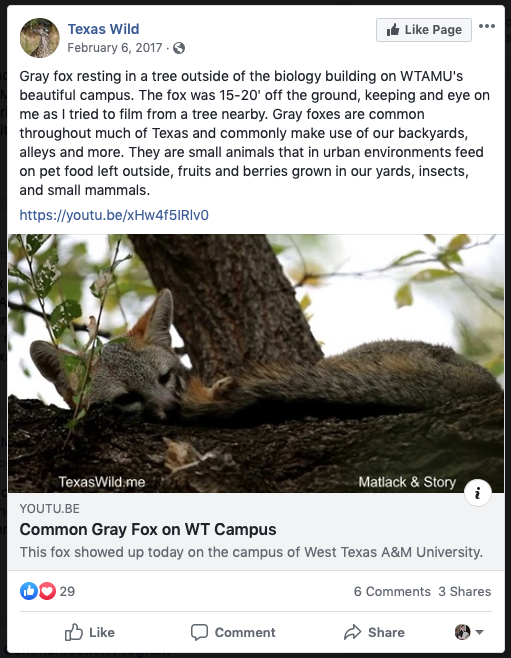 This gray fox was found napping in a tree outside one of WTAMU's buildings and some students are able to capture this animal on video having a peaceful rest.

Earlier in the semester, I received an email from Dr. Trudy Hanson, Head of the Department of Communication, about a potential story for The Prairie News to cover. In Hanson’s email, she told me about four different instances in which foxes were somehow making their way into the library and falling through the ceiling into the Hastings Electronic Learning Center with no idea of how they were getting in.

Initial reaction around the newsroom was disbelief and humor with fox puns flying everywhere (headline credit to Senior Reporter Olivia Spiezio), so I knew I had to do the story. Eager for a new and potentially entertaining story, I emailed the people Hanson said she talked to about the foxes, hoping to secure interviews with them to gain more information on the subject.

Those who interacted with the fox and spoke with Hanson about the animals were contacted through email for a quote. They stated that they were reluctant to comment on the story because it was “not something that we would want to broadcast” and “some people may have a negative response.” They did not specify when these foxes somehow made it into the building and as a fox cannot be charged with criminal activity, I could not find the incidents on the daily crime and fire logs that are currently available on the University Police Department webpage (crime and fire logs for Oct. through Jan.).

“Some people may feel that the HELC is not a safe place because of the fox. Some may think we have mistreated the fox because we had UPD remove them. Some may come to the building to find out more and I think that might be a distraction to our students who are here to study and attend class,” said Ashley Eller, administrative associate for Information Technology Services.

These are all legitimate and understandable concerns for an office to not want to talk about however, there falls the concern of not informing students of these incidents. I understand that if people learn about wild animals making it into buildings, they would not want to go into these buildings but this is a learning environment, not a business. These people are students who want to use the HELC for its easy access and quiet studying conditions, not customers looking to purchase something to help boost a business’ profit margin.

Which leads me to my point: the importance of keeping the student body informed. I had to be informed down the grapevine by my department head about these situations, that had the potential to become dangerous, who heard it from employees in the HELC instead of from campus authorities. Personally, I would like to know if a wild animal could possibly fall from the ceiling while I’m in the middle of studying instead of learning after the fact that it was decided to not inform me and my fellow students.

For those who don’t know, these are not our first encounters with foxes on campus, and I doubt will be the last. After a quick social media search, I found a post on the WTAMU Facebook page showing a fox on the roof of the Killgore Research Center, dated Dec. 12, 2013. Another post by Texas Wild linked a youtube video of a gray fox napping in a tree “outside of the biology building on WTAMU’s beautiful campus” dated Feb. 6, 2017.