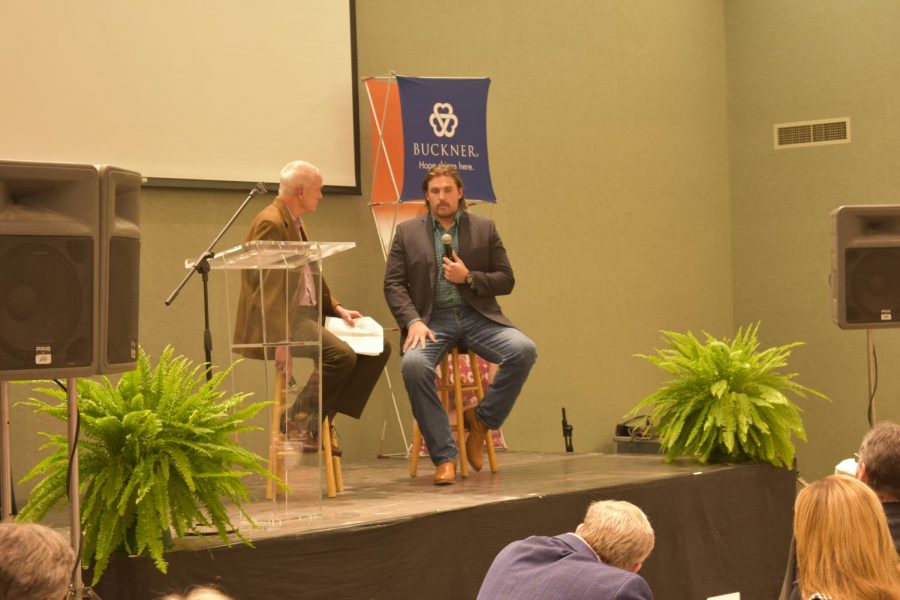 As the 6’3” Richburg stepped on stage, Beilue joked that the NFL center was tilting the stage over. The crowd laughed along as Richburg attempted to respond with a mic that would make bass-boosting “putty” like-sounds as he spoke. With that, Richburg said “hello” and rang the room with a heavy bass blast.

Eventually they fixed the lineman’s mic, Richburg opened up about his journey as a football player. He sustained many injuries over the course of his career. He originally played quarterback his freshman year, until he tore his ACL the following season. Richburg was sidelined until his senior year, and then converted to a left tackle. Having only recorded 11 games as a lineman, Richburg had trouble getting recruited for a college. “It was frustrating and there were times when I got scared that I wouldn’t be able to play,” said Richburg.

However he was recruited by multiple schools including West Texas A&M University, Texas Christian University and Colorado State. “What I’ve learned throughout my college career, but just continue working on your craft,” said Richburg. Of course, that transitioned into success for the center as he was drafted in the second round as the 43rd overall player selected in the 2014 NFL draft by the New York Football Giants. In his second pro year, he was rated as the number two overall center by Pro Football Focus.

Even in his professional career, Richburg sustained many injuries and most recently torn patellar tendon that sidelined him from playing the superbowl this past season. However, he has described signing with the 49ers as one of his career highlights. “It’s probably one of the best football relationships working relationships I’ve ever had. And I think it really showed this last year.”

A few WTAMU students and alumni attended the event and were inspired by the event. “For WT, I think it just puts it out there that there are opportunities beyond what you know what’s taught to us in class or, you know, just word by mouth or word of mouth. There’s tons of opportunities out there these students, if you just jump out there and find them,” said Kamisha Jackson, a Buckner FYi case manager and WTAMU criminal justice graduate.

Another WTAMU alumni and Buckner FYi case manager, Jessica Delarosa who graduated with a bachelor’s degree in social work commented on the effect Richburg’s platform has on the community. “I think just the fact that there’s so many people here locally that know him and are aware of him and have come to support Buckner — And him allowing himself to come and speak for our event and just bringing the community closer together through football,” said Delarosa.

Richburg spoke humbly as one of the few players in the NFL to be from the Great Plains. “You know, I think a lot of people are prideful from being in the panhandle anyway, but the fact that I get to go and play a child’s game and represent the panhandle is very surreal,” he said.