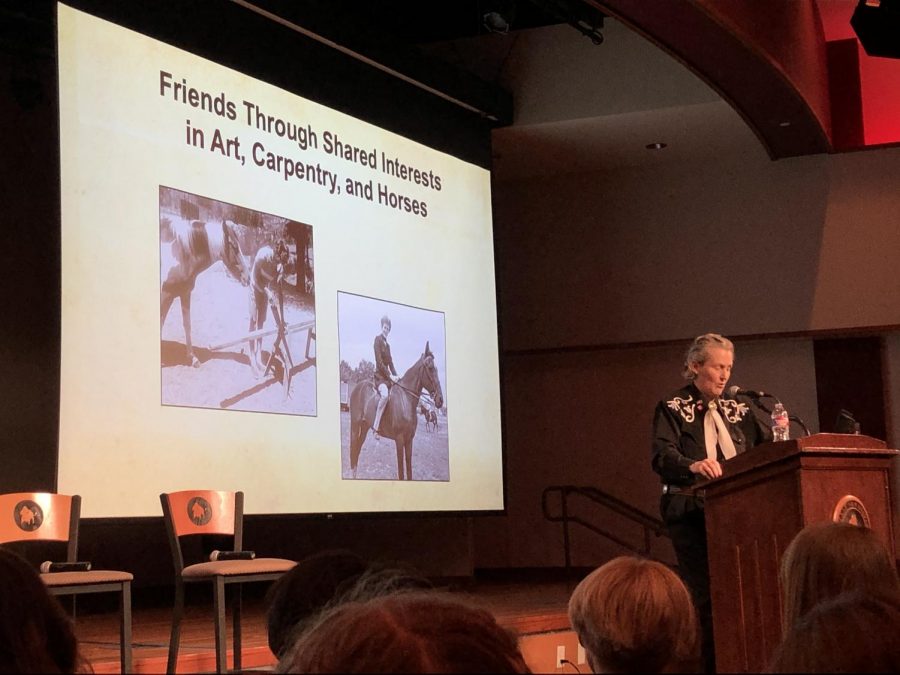 Dr. Temple Grandin during her lecture on Tuesday/Photo by Olivia Spiezio, reporter

On Tuesday, Feb. 19, West Texas A&M University’s Distinguished Lecture Series brought Dr. Temple Grandin to speak to an audience of over 1,000 individuals in Legacy Hall at the Jack B. Kelley Student Center. The event brought a crowd so large that every additional event room in the JBK was utilized as an overflow room as students and families across the Panhandle flocked to hear Dr. Grandin speak on autism, learning disabilities and the importance of embracing differences across the agriculture industry.
Dr. Temple Grandin was born in Massachusetts but grew up around horses and cattle, sparking her lifelong interest in animal agriculture. Grandin’s work as an advocate for animals is matched only by her work in the autism community; as someone who struggled with complex mathematics and was nonverbal until age four, Grandin advocates largely for letting neurodivergent children explore the things that interest them instead of forcing them to think, behave and work the same as the neurotypicals around them.
Grandin’s lecture on Tuesday, which focused on educating different types of minds, heavily emphasized the importance of letting individuals thrive where their talents lie.
A recurring theme of Grandin’s work is the different types of thinkers. Grandin described herself as a visual thinker, and attributed her success in the industry to being a visual thinker.
“Autism is an important part of who I am,” Grandin said. “I wouldn’t want to change because I like the way that I think in extreme visual matter… When I first started working in the cattle industry, I thought everybody [was] a visual thinker. I didn’t realize that I thought differently.”
Grandin went on to explain that her thinking and processing style allowed her to get in the mindset of the cattle and effectively formulate designs for the physically and emotionally humane treatment of cattle. She explained how thinking visually cut out the distractions that caused miscommunication in the handling of livestock.
“In my very early work it became obvious to me that you aren’t looking at what the cattle are looking at,” Grandin said. “They spook at a shadow, they spook at a coat on the fence or a truck parked next to the facility.” Grandin added that by looking at the whole picture and thinking about what could be frightening to cattle she was able to improve upon overall handling and welfare in livestock facilities.
Grandin’s parting advice on Tuesday evening was for parents and educators to embrace the things that make children unique, not try to homogenize them. She expressed her frustration with the obsession with special education departments, stating that many of the great minds throughout history would be considered special ed students today.
“We pound away on the disability and don’t focus on the ability,” she said, providing endless anecdotes of successful tradespeople who would have been considered autistic or ADHD.
More information about Dr. Grandin’s life story, her educational philosophy, her animal studies and her conferences can be found at her website. Her books include “Thinking in Pictures”, “Animals Make Us Human”, and “The Way I See It”.