Joanne Bland speaks so others will not forget 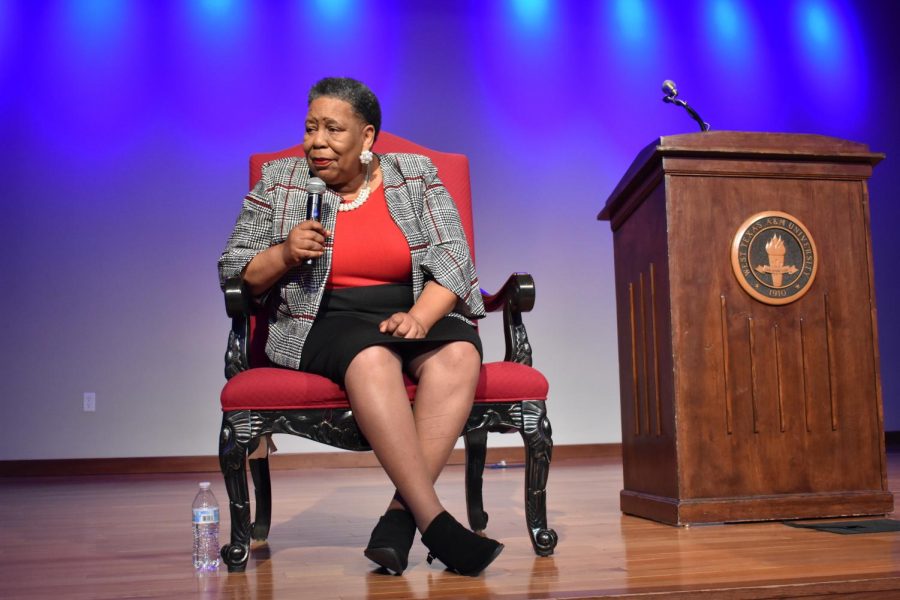 After her talk Joanne Bland held a Q&A portion to answer questions from the audience.

Students listened to someone who has been through struggle, segregation and civil rights in the South.Her name is Joanne Bland and her stories may not only be powerful but also her message to students on campus.

According to the wtamu.edu/news “Joanne Bland marched with Martin Luther King, Jr., in Selma in 1965, and will speak at West Texas A&M University as part of the Distinguished Lecture Series at 6 p.m. Wednesday, Feb. 26 in Legacy Hall in the Jack B. Kelley Student Center.”

Before the event began, a march took place at 5 p.m. to commemorate the fight for voting rights of African Americans and women. The marching path was from the Dining Hall to Legacy Hall, Jack B. Kelley Student Center where the speaking event was held.

“Of course, you know, voting rights obviously African Americans their voting rights have been greatly limited in the South and you know, part of this, the idea, Martin Luther King’s idea was really that we need to get publicity about this event. We need to show the American people how corrupt the South is at this time we need to show the American people how African Americans who merely want to use their constitutional right how they are being treated,” said Dr. Marty Kuhlman, professor of history.

Students learned  historical events from the past. They also listened to recollections from firsthand experiences that Bland lived through and was a part of. Bland works for Journeys for the Soul as a speaker nationwide.

“Well, I think it’s very exciting to have someone like her, who not only was an eyewitness to some of these important events in the civil rights movement, but a participant in them and so as a very young girl, I think you know, she participated in some of the marches that were led by Dr. King and others in the struggle for equality and voting rights for blacks,” said Dr. Wade Shaffer, professor of history.

An event taking place right here on campus that will bring up not only the struggles and the fight for equality but also, the process of overcoming and perseverance when at a time none seemed to be in existence. Joanne Bland spoke when others could not and now, she speaks so others will not forget.

“There’s going to be a Q&A session after her presentation. Like I said someone who was not just a witness to these events, but a participant in some of the most important events in American history so don’t get those opportunities very often,” Shaffer said.

“One thing I see students from all over this world and tell them the same thing I just told you, but also hope what I talked about empowers you to get up off your behind and do something when you see a wrong, you can’t just sit silent and watch it, get in at the table and talk about it among yourselves and not do anything and also like the young people to know they’re part of the puzzle for social change,” Bland said.