The performers of ‘Everybody’ on performing Everybody 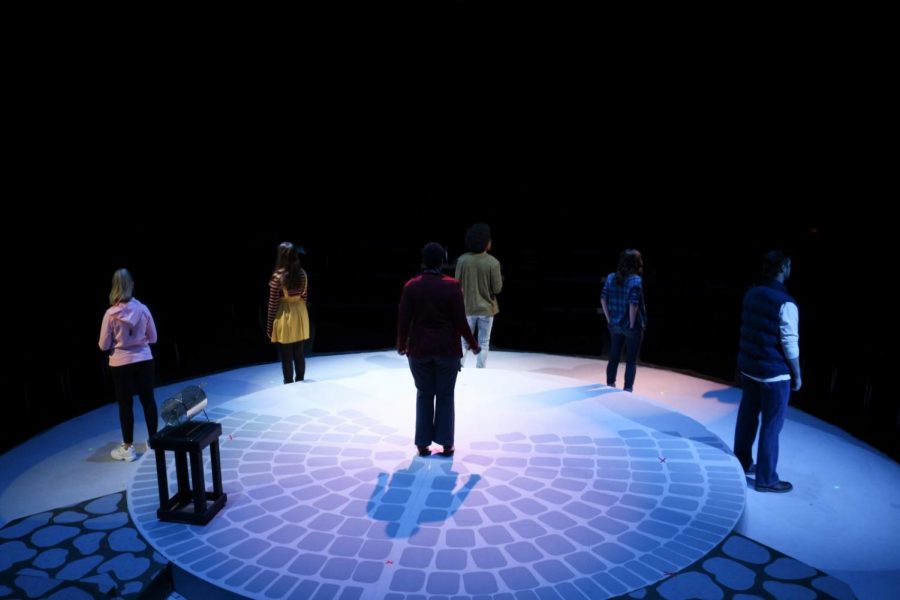 The five 'Somebodies' and Understanding, just before the drawing to see who will play 'Everybody'. Photo courtesy of the WTAMU website.

Earlier this February, the Theatre Department put on West Texas A&M University’s rendition of the Branden Jacobs Jenkins’ Pulitzer prize-winning drama play “Everybody”. The drama revolves around Everybody, a single human standing in for humanity, being notified of their oncoming death and rendezvous with God in order to make an appeal for the usefulness of their life. Characters such as Death, Understanding and Love act as guides of sorts for the bewildered Everybody, who is played by one of five different actors each night. On permanent rotation, these five actors are required to be able to play any of the five roles they must pull from a raffle at the beginning of each performance. Every night one of the actors will forgo playing Friendship, Kinship, or the embodiment of Everbody’s belongings, and instead take on the blank slate of Everybody, a person damned to meet God alone.

“I was super excited when I got the role. I knew it was going to be the biggest challenge of my college career, and I knew it would push me in a way I hadn’t been,” said Cheyenne Haynes, a senior theatre performance major and one of the five actors to play Everybody. “I can memorize like nobody’s business, but if I feel comfortable in something I can become so consistent that it becomes too perfect and great acting isn’t perfect. This would force me to be completely spontaneous every day, and I think I needed that to truly embody my acting. I was terrified, but I also knew that fear was a good thing.”

“I definitely was more excited than I was scared,” said Derek Jordon McDaniel, another senior theatre performance major who played Everybody. “There was a lot of fear. I didn’t know how we were going to do it. But, Stephen [Crandall, the show’s director] cast us in November, and I just knew that he had enough time to get us to the point that we needed to be ready at in February.”

The preparation for such a task is naturally to be intimidating and arduous, but the students were not left on their own with the assignment. Their directors sectioned out their scripts and abetted in their memorization as best they could. Some of the actors took to color coding their roles, recording and replaying tracks of each character, or using apps to help their memory.

“The preparation felt like a blur. It felt like I got the script and suddenly I was supposed to be off book and ready to perform in two days,” said Haynes. “The preparation was mainly mental for the first month. I just had to get my brain to wrap around the idea of switching. Once the lines were memorized the preparation became entirely emotional. I had to accept that I had no control over what happened each night, I would never have a perfect show, and I could always be bigger and better, but I would never feel fully comfortable in anything.”

“Really, it was just a matter of going over each track like it was a different play and a different character and keeping that all separate from each other,” said McDaniel.

Jenkins’ original script has very few stage directions, no physical descriptions for the characters and no requirements for the actors which may impede their freedom of expression when it comes to portraying such a universal character. This affords both the director of the play and the actors to fully collaborate and make each performance unique and a collective vision of mutual cooperation, not the vision of one person in particular.

“The process was a blast because each of us five are such different people,” said Haynes. “We each came into each role with a different conception and a different view. We also all had different specialties and skill sets so you would see someone else do it and just marvel because they did something amazing that you couldn’t do, but their interpretation doesn’t make yours any less amazing it just makes each one unique. Each audience got a different message based on who played what and how their backgrounds affected their choices. That’s what made this so special. We as people reflected what the audience needed to hear each night.”

“It’s hard to even remember when we first started going through the characters in everybody,” said Annabella Walker, the only freshman acting major among the five students playing Everybody. “From the very first table read we were all making different choices as a cast especially the Somebodies. We ended up stealing and taking other things from each of the people we were working with but at the same time we all made the characters our own.  At first the idea of coming up with five different characters was super daunting but it came very naturally with the writing that Brandon Jacobs-Jenkins gave us.”

The emotional nature of the play and its themes of legacy, death and catharsis not only make it a great inclusion on an actor’s resume, but also make it a daunting and invigorating role for any actor to tackle.

“I think that playing Everybody gave me a lot more tools to build my professional career off of,” said McDaniel. “There’s a lot of fundamentals that Everybody really needs you to have perfected. The challenge of Everybody has given me the confidence to take on pretty much any show—any show, any director… I’ll carry on the fact that I can hold five different characters in my head.”

“It made me trust myself,” said Haynes. “I think I’m walking away with more security in my ability and a stronger sense of my body’s capability and the depth of my emotions, which I think is going to make me a more aware and freer actor. I think I’m walking away with the confidence and the mindset to pursue acting full time as a career and realizing that if I go out and be myself and follow my natural impulses I will find work.”

“There is definitely an emotional attachment that I have formed with the show and with the people that I was in the show with,” said Walker. “This was a very vulnerable show for me especially in the climax of the show where we surrender, and it has really taught me to shed any other feelings I am feeling and put aside anything that’s happening in my life and purely just act in the moment.”

“Portraying these characters was frustrating, exhausting, illuminating, exciting, and cathartic,” said Haynes. “The Everybody role was the most vulnerable and challenging in my opinion because I essentially played myself. Yes, it’s a character with lines, but I was playing myself as far as characteristics and how I approach situations. It was so terrifying and yet I’ve never felt more alive and human… It was the most cathartic experience I’ve had. I had no way to plan things out, they just happened and I just reacted and that’s what makes acting raw and fun and new.”

Leaving WTAMU with “Everybody” behind them will help bolster these actors’ confidence, aid them in their endeavors, and will have shown them something new about themselves.

“All the show really wants to tell you is to be a good person,” said McDaniel. “Any time I guess… I find myself trying to be a bad person on accident, I’ll just think back to this experience and think about… what did the show ‘Everybody’ tell us to do?”