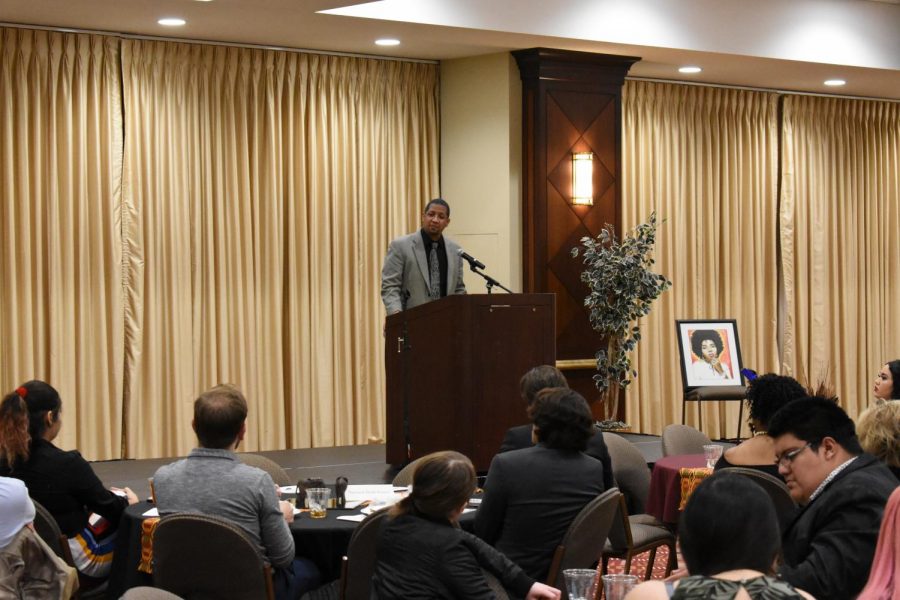 Michael D Royester, a social science teacher from Prairieview A&M, speaks in front of everyone.

The first annual Black History Month Banquet was held at West Texas A&M University’s Alumni Banquet Hall on Jan. 17, 2020. The banquet was put on by WTAMU Black Student Union and the Office for Diversity and Inclusion. The event was headlined by guest speaker Michael D. Royster, a behavioral and political science instructor at Prairie View A&M University. 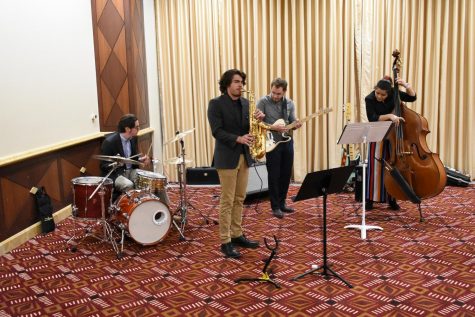 The event was opened up by BSU Vice President and senior psychology major, Kayla Grieco, who noted that black history is made everyday as she introduced the event. “We’re still becoming more of a majority and less of a minority,” she said. Charles Cox, a junior and criminal justice major and a member of the Black Student Union described the event as a day to remember and get everyone to talk about black history.

Diane King, a financial specialist at the Business Office, who was one of the main sponsors of the event felt that the banquet would make more students be able commemorate black history.  She came across Royster when a student recommended her to him. There was not enough funds initially to bring the speaker over to WTAMU, but Royster was able to self-fund himself as long as the university paid for his hotel. “People are worth it,” he said.

Before Royster was brought out to speak, the works of students were acknowledged at the event. One of them being artwork produced by DeAndre Jones, a junior graphic design major, which was the portrait of a light-complected African American woman with an afro. “One of the problems I wanted to highlight with my art is that I think that women aren’t appreciated enough–women of color are specifically too because I think that in our like, even in our own, you know, communities, we prefer people with lighter complexion–instead of the women that we have within our own communities,” Jones said. He also said he wanted to show that women in the black community can be just as beautiful as anybody else in his art. 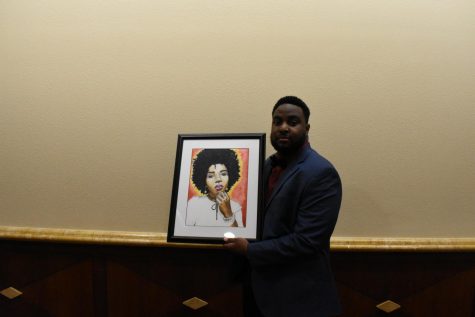 Many commerations to figures of African Americans were made throughout the banquet as well. Preceding the guest speaker was Cox who talked about his struggles growing with a single mother in eastern Lubbock, Texas. As he acknowledged Alexander Twilight and Mary Jane Patterson as the first black man and woman to receive their bachelor’s degree respectively; he discussed the four points to being a successful human being. “Be you, be proud, be consistent, be passionate,” he said. Cox said that the speech was towards the younger generation, he wanted to address that African Americans need to be more united. “The fact that nowadays is we’re all either too good for each other or there’s a problem with each other. That’s a problem within ourselves, and we need to fix [it],” he said.

After the student presentation, Royster was finally brought out to speak and the focus of his speech was to explore what it takes in building a great legacy for future generations. He acknowledged that it was the 150th anniversary of black suffrage and the 100th anniversary of voting rights for women. With that, he told stories about his family who grew up in oppressive times and how they were able to overcome adversity. A notable ancestor of his was Lizzy Royster of Burnt Corn Alabama who was born in 1886. She was a grade school teacher who taught many students how to read. 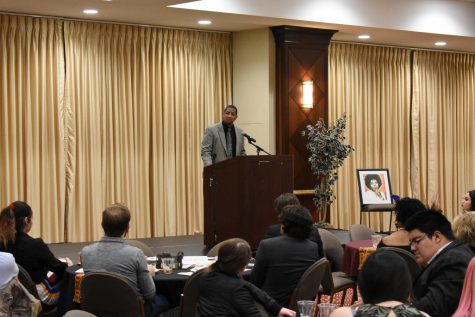 Photo by Rafael FloresMichael D Royester, a social science teacher from Prairieview A&M, speaks in front of everyone.

In addition, he talked about the importance of remembering notable figures in African American history. “Whatever torch we have to carry, remember Harriet Tubman,” Royster said. He noted that it was important for these historical figures to be discreet with everything they were doing. He included this concept in another story which was about the goals and objectives of a journalist to seek the truth. Royster closed the speech with the words of James Weldon Johnson. “Let us all march over until victory is won,” he said.

King then came onto stage to commemorate university alumni, Nathaniel and Helen Neil who were the first black female and male graduates of WTAMU. The new multicultural suite in the Jack B. Kelley Student Center is named after them. “Every great dream begins with the dreamer,” King said.