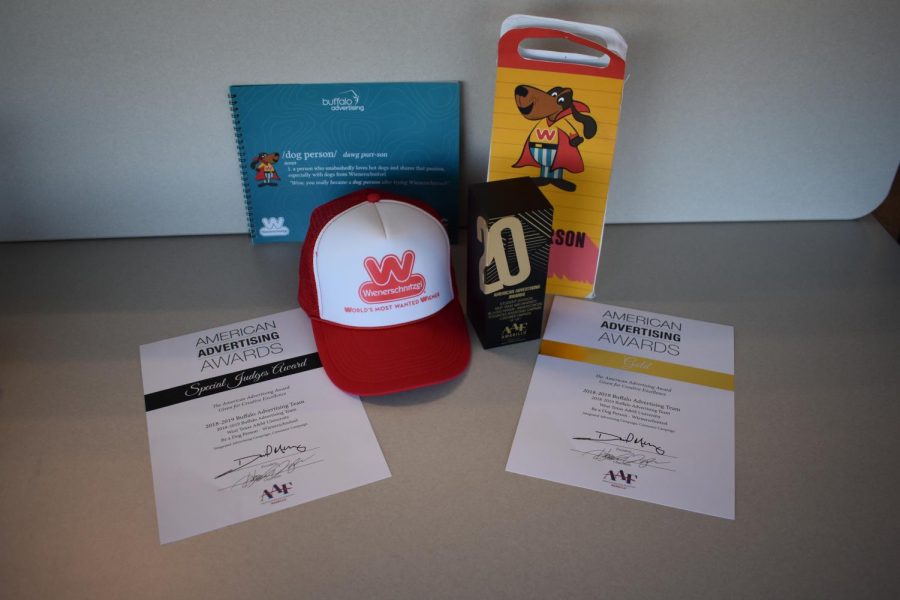 Hard work and planning pay off in many ways for the Buffalo Advertising Team.

Buffalo Advertising team rose to the occasion when creating a campaign for Wienerschnitzel in an effort to change the perception of the hot dog.

“So what we came up with was ‘Be a Dog Person’, that was our campaign and so essentially, what we’re trying to say in terms of our campaign was a lot of people are dog people in terms of having dogs as pets. But we wanted people to be a dog person more specifically a hot dog person,” said Dr. Mary Liz Brooks, assistant professor of media communications and adviser of Buffalo Advertising.

While the process for this advertising campaign took two semesters of planning and execution, the buffs did not walk away empty handed. In fact the work that was put in left theBuffaloes pulling away with multiple awards

“We went and competed in Corpus Christi last year, and then just last week we received an Addy award. We received a gold award for that campaign from last year and then we also won a Special Judges Award as well for the campaign,” said Erin Westermann, senior advertising public relations and applied communications major.

Students on the Buffalo Advertising team come from many different specializations, all with a different set of skills and abilities that helped complete this campaign as well as win some awards.

“I think the process is super interesting. I think like, sometimes a lot of people that are in the digital media part of things and not ad/pr, kind of overlook Buffalo Advertising as an opportunity to kind of expand and get opportunities. But as a digital media person, I think it’s a really interesting opportunity,” said Chase Brady, senior digital media communication student.

Hard work and dedication seem like what it takes to complete an advertising campaign of this size for a company as big as Wienerschnitzel. The work done on this campaign definitely did not go unnoticed.

“Buffalo Advertising is student-run and I’m just the adviser so they essentially make all of the decisions because you know, it’s their campaign, and I want them to take ownership of it so I’m their adviser and I just make sure everything sounds good,” said Brooks.

Coming away with multiple awards through the American Advertising Federation shows the hard work and dedication of students working juggling classes, homework personal life and many more. This did not stop these students from putting their best foot forward and bring awards back to the university.

“I’m really proud of the team. I was account executive for the team last year so just that… it’s really gratifying to receive the recognition that it was a job well done,” said Westermann.