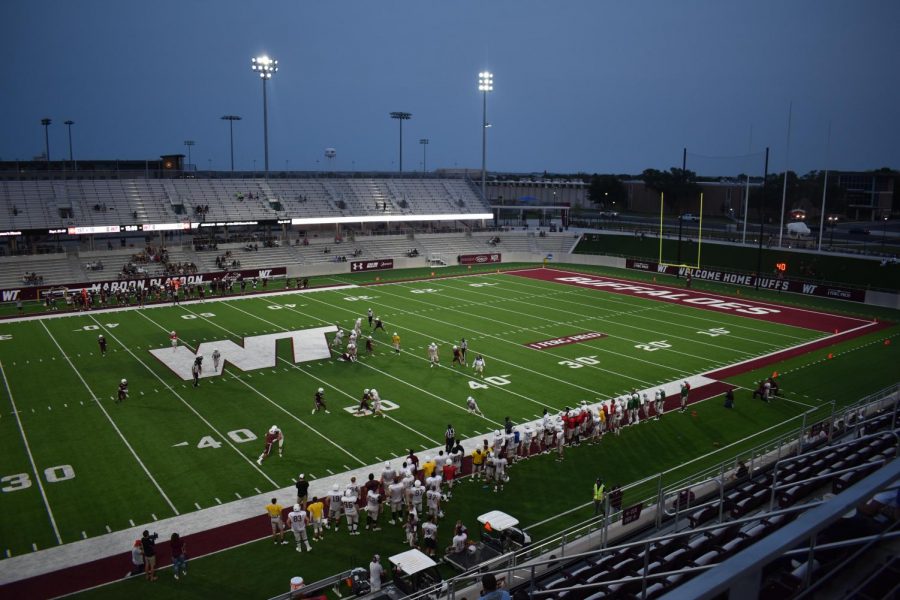 The Maroon and White game took place on Sept. 12, 2020 to showcase the talent the 2020-21 West Texas A&M University football team has to offer. This was the first football scrimmage open to the public, just in time for the season opener against Oklahoma Panhandle State on Sep 19.

This year has proven to hold many uncertainties and surprises. Originally proposed, the WTAMU athletics for the fall semester were to be postponed or canceled. Fortunately, the Buffs are going to be able to have a season after all. Though it will be shorter than normal, WTAMU will face off against seven opponents in this brief season.

The atmosphere surrounding the scrimmage was of some bittersweet feeling. The stands won’t be as packed as they are normally due to the limited capacity, but the fans in attendance still enjoyed their time. As I walked through the stands I noticed the normal Buff Pride and comradery that has been instilled in us as students and alumni alike. These little moments of normalcy seemingly bring us all together that much more.

Shaking off the cobwebs, the Maroon and White teams faced off against each other’s first and second-team offenses and defenses. Though the game was a scrimmage, that didn’t stop players from competing. The rivalries and challenges players pose with each other heightened their skills and pushes one another to be that much better.

The scrimmage consisted of normal drives, practiced formations, “garbage time,” and 2-minute drills. The latter half of the scrimmage put players in high-stress situations like being down by a score with little time left. These are situations that teams at any point could see themselves in, and any decision or mistake could factor into a win or a loss.

The competitive nature of the players flowed between downs and showed in their teamwork and chemistry. Both sides gave each other trouble and showed pieces that needed some work. We have a relatively young team, but the work they’ve put in in their time allowed to practice together shows their determination. Like a well-oiled machine, both sides of the ball put on a show for the fans in attendance, a mere taste of what’s hopefully to come Saturday.

Tickets are limited, and anyone looking to purchase them should follow this link. Students are granted one admission free ticket throughout the semester and can follow the student link through the previous link.