Buffaloes beat OPSU in first football game of the season 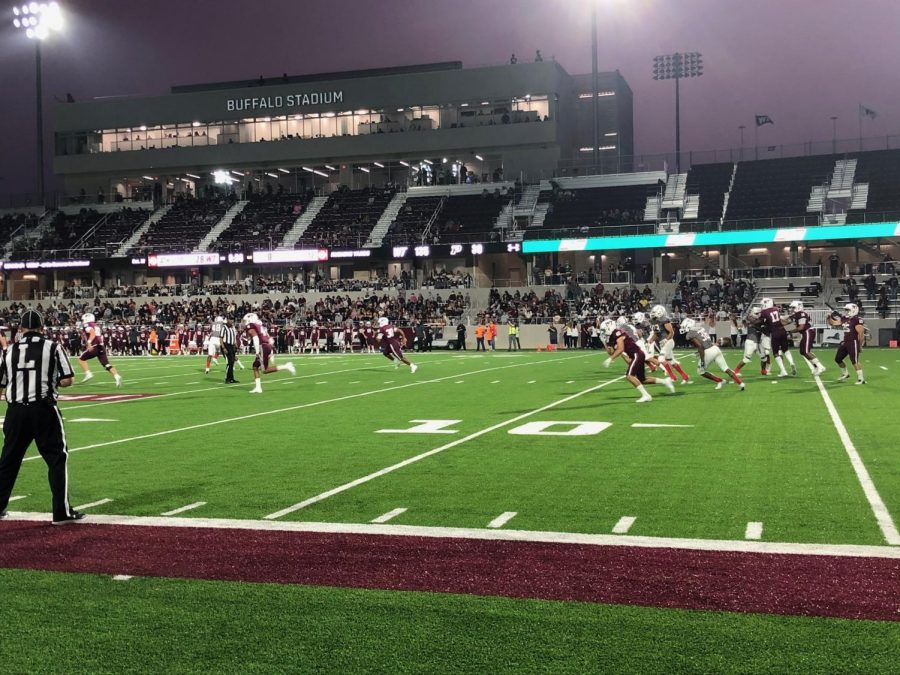 OPSU would score their first touchdown in the second quarter. At the end of the first half the score was 37-7.

The Buffaloes were to receive in the second half. Junior running back, Brandon Blair, had an outstanding night. Blair continued running the ball in the third quarter bringing the score to 57-7 Buffaloes.

In the fourth quarter, running back Isaiah Smallwood had a 75-yard run for a touchdown. The Buffs would dominate the Aggies and ultimately succeed within a 58-7 win.

The WTAMU running backs would demolish the game.

“This game against OPSU we already had the idea that we were just going to run the ball down their throats. We have a solid group of running backs. We’re pretty much unstoppable in the run game. Even if our passing game doesn’t work out then we will always have our run game,” said junior, running back Price Ugwu.

Ugwu also mentioned what it will be like moving forward in the season.

This was a high scoring game in the Buffs’ favor.

“I feel that we had some highs and lows in the game, we should have kept our foot on the gas pedal the whole time. We made mistakes, we’re going to make mistakes every game but we got the win and that’s all that matters,” junior wide receiver, Wellington Bridges said.

Bridges also spoke on how he felt being home in Buffalo Stadium.

“Truth be told I didn’t even want to practice at first let alone play because of what’s going on. We started practicing and got pads on, I couldn’t wait to get on the field. It was so exciting to be down here and the energy from the fans was great,” Bridges said.

This game against OPSU was completely sold out. There were fans surrounding the stadium supporting the Buffaloes, cheering their team on to victory. Along with them, the Maroon Platoon showed school spirit by painting up and chanting the Hakka.

“I think the turnout was great for the first game, especially with having different precautions in place for [Covid-19]. Overall I feel like we had an amazing section and a lot of great new people there. It’s hard to say what I expect through the season, especially because this year has been constantly changing. I’m hoping to have a lot more games like this one, if not, bigger. I’m excited to just get to have more awesome people in our section with us,” president of Maroon Platoon, Katie Taylor said.

The Buffaloes’ next game will be on Sep. 26 against the Angelo State University Rams in San Angelo, Tx.