Benjamin Azamati: The young decorated Buff all the way from Ghana-Africa 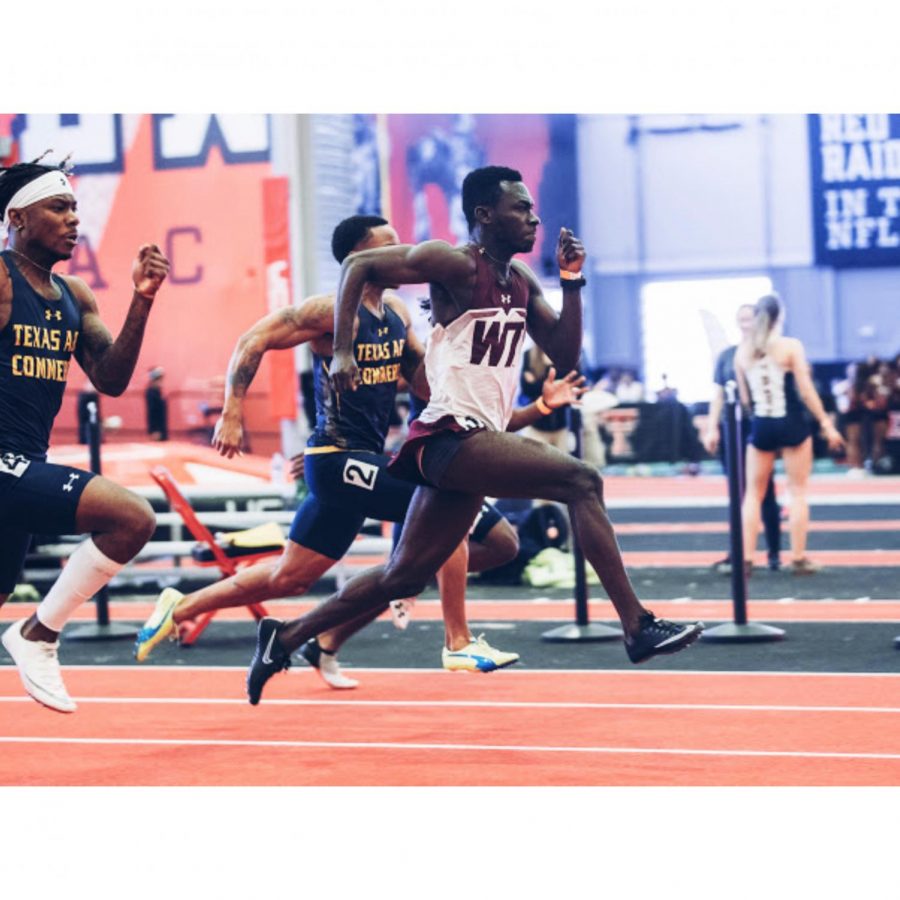 Benjamin Azamati at the finish line at the Spring 2020 LSC conference.

Many a time, there are people who chance upon stepping into the limelight, and there are others who are simply intentional about the minutest of opportunities granted them to work their way all up into the limelight. One of such impressive persons would be the pre-veterinary major freshman at the WTAMU, Benjamin Azamati. Born on January 14, 1998 in Ghana, the 22-year-old initially had a thing for soccer but somewhere along the line, took a loving interest to the tracks; sprints to be precise

While at the University of Ghana, Legon, Azamati beat the then 100 meters defending champion to win gold. That gave him a nod into the school team where he represented the university in local competitions such as the Ghana Universities Games where he won two consecutive gold medals and currently holds the 100 meters record. For international competitions, he also represented University of Ghana, Legon at the West African Universities’ Games in Nigeria, as well as in the maiden edition of the African universities’ Olympic Games in Egypt where he won gold and holds the existing 100 meters record. He got ushered into the Ghanaian track and field National team due to his consistency in performance.

“I am taking everything step by step you know? The Bible says that ‘If the Lord does not build, the builders build but in vain’, so I am depending on God and then my hard work,” Azamati said.  “And as I said I am taking everything step by step- I am still improving, I am still progressing. I trust in my coach and whatever that I want to get in athletics, I would get there by all means.”

Being in the Ghanaian Track and Field National team gave him the chance to complete certain national assignments: The World Universities Games in Napoli Italy, The West African Zone Two Athletics Competition in Niger, the Grand Prix in Burkina Faso, the African Games in Rabat Morocco where he won a gold medal with the rest of the 4X100 quartet and the 2019 IAAF Championship in Qatar where the same quartet represented Africa.

Fast forward into the Spring of 2020, Azamati gained admission into the WTAMU where he gracefully combines a demanding major with track and field. While at WTAMU, the sprinter describes his transition from his previous university to WT as one that was amazing and something he was actually looking forward to; he has been well received by both his coach and teammates.

“Comparing here with my previous school there’s been a major difference, you know, when they are making up your time table for classes and all, they consider you being a track and field guy and then they makes sure your academics does not interfere with your track activities. The various instructors also believe in strengthening your muscles and everything so I think that’s making everything easy and that’s how I am coping.”

Azamati currently holds the 60 meters-dash record here in the WTAMU. He is also a NCAA Division II Lone Star Conference 60meters champion for the year 2019/2020. He is currently among the Top 5 NCAA Division II 60-meters all-time bests. With regards to awards, Benjamin Kwaku Azamati was awarded as the Sportsman of the Year 2018 back in the University of Ghana, and the Most Exceptional Ghanaian Student Athlete. At WTAMU, he has been awarded as the Freshman of the Year, at the same copping the Sportsman of the Year award all in his first semester of study.

But for the prevalence of COVID-19, Azamati together with the rest of the quartet would have represented Ghana in the 2020 Tokyo Olympics which has been postponed. The sprinter now looks forward to making do with the extra period to practice more, and to be better.As hobbies, the sprinter likes to play Uno, watch soccer and play video games.

“My peers and those who look up to me would have to focus on the three Ds in life, that’s discipline, determination and dedication,” Azamati said. “Once you have these three Ds in life, whatever goal you want to achieve, you’re going to get there; I mean that is what I did and it is working for me, so yes, that is what I would tell them to do: to be disciplined, dedicated and determined in whatever that they want to do”