Intramurals are ‘set’ with sand volleyball 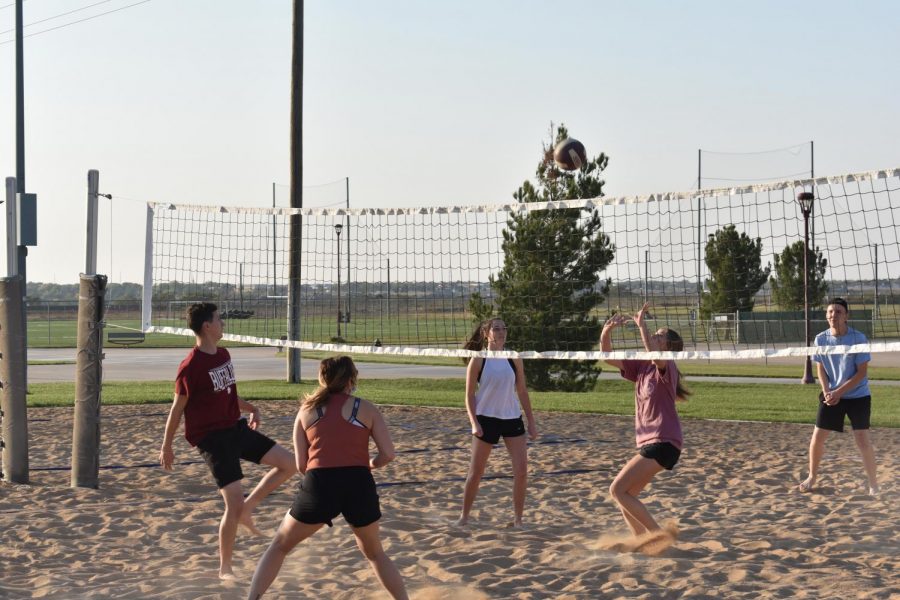 Intramural sand volleyball games are played on Wednesdays and Thursdays at the courts behind Buffalo Stadium.

The pandemic has caused many on-campus activities and events to change drastically. Intramural sports at West Texas A&M University is one of the several activities to implement certain guidelines to keep the campus community as safe as possible.

“We wanted to create an atmosphere where kids could still do the things they liked from last year, but also stay safe with guidelines,” said Aubrey Mead, intramurals supervisor.

Previously, intramural volleyball games were played indoors at the Virgil Henson Activity Center. However, with many safety measures needing to be considered, the outdoor option was put into place.

“It’s easier to spread out. And people are a lot easier to wear masks when the weather is nicer, colder versus indoors when the sweat builds up,” Mead said.

Some players have had to adjust to the changes in different ways.

“You have six people on the court rather than four. But … the courts are shorter outside, which is kind of nice. So it makes up for being only four instead of six,” said Shelby Ford, junior agriculture media and communications major.

Ford is a member of Zeta Tau Alpha at WTAMU and finds that intramural sports is a great way to bond with her sisters, especially during this time.

“Two of the people on my team are new members, so it’s really nice being able to get to know them more, especially with [COVID-19]. It’s really hard for us to like, get to know each other and go out and stuff, so I mainly do it to just meet new people,” Ford said.

Ford not only gets to meet new people while competing in intramurals but also gets to participate with other greek life organizations.

“I think it’s a great way to meet new people and get involved on campus while still doing something that’s fun, and you can also be competitive,” Ford said.

The fall semester has changed in many aspects, one being the way students socialize and meet new people. With intramural sports, students are still able to have those opportunities.

“It’s something to do now that there’s not a lot going on … we build friendships with our teams and other teams. We have a good time,” said Jaylynn Tortorelli, junior animal science major.

Regardless of a student or staff member’s skill set, intramural sports at WTAMU can still be a fun way to safely socialize and be involved.

“It’s just fun even if you’ve never played before, it’s still fun to like, get out here and do something cool,” Tortorelli said.

For more information about intramural sports and how to join, students and staff can visit this link.

“Just come join online or anywhere really, if you talk to any supervisor, any ref you come out for a day will sign you up right there. Or, you can just go to the WT rec sports page where you sign up for everything in the AC and the links are right there and you can create a team where you can join anything,” Mead said.