In the eyes of the artist 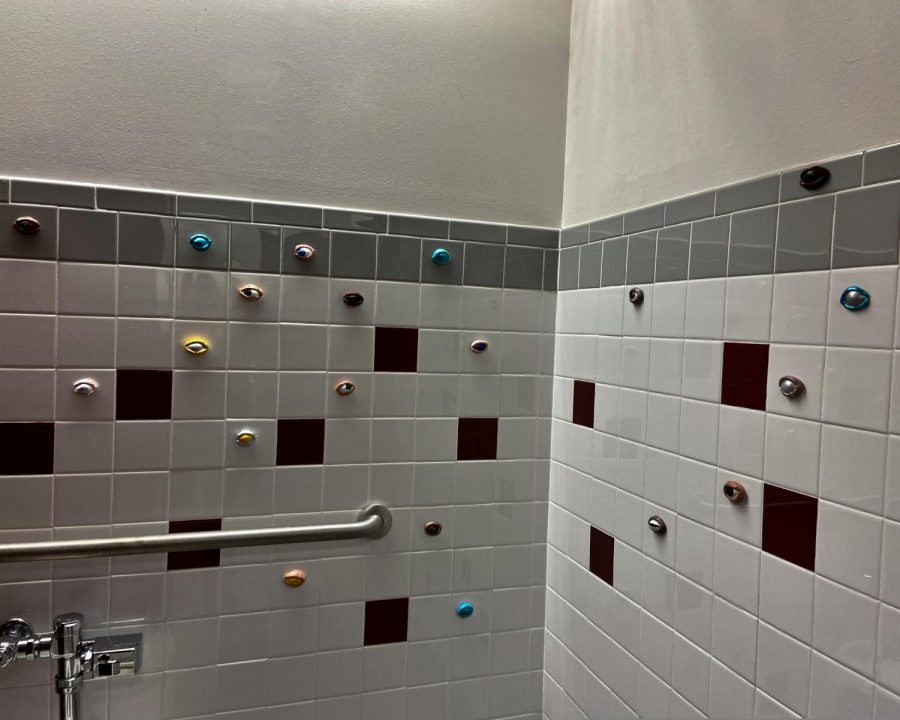 Art is more than a hobby. Art is essential to human life, especially for West Texas A&M University’s own Jessica Person, a sophomore studio arts major with an emphasis in drawing and sculpture making. With the reveal of many art pieces in Mary Moody Northen Hall, Person’s shocking display of 31 eyeballs within the men’s bathroom has created a lot of buzz within the community.

“So, my bathroom piece. So some people have been talking about it, it is 31 eyeballs stuck to the bathroom wall. It is about the way that women feel sexualized when men stare at them,” Person said. “If you look at the eyeballs. Some of them are trying to look away from you. Some of them are trying to make you feel safe, but because the eye right next to them is staring at you in a sexualized way, you still feel uncomfortable. The idea is to show people we need to hold each other accountable.”

Person realized her work had the power to impact those around her, and she decided to take that opportunity, despite what onlookers would think.

“It’s kind of, you know, kind of freaky and a little unsettling but it’s a lot more, that feeling is kind of amplified whenever they’re in the stalls and in the urinals. I mean, like all those eyes are watching you so it’s really unsettling it’s really uncomfortable,” said John David Andredae, senior music education major.

“I hate saying that I wanted to make someone uncomfortable, but honestly, it is. I want them to feel how we feel when we feel sexualized,” Person said.

This isn’t Person’s only piece that she has poured her heart into. She recently finished a piece for her grandfather who passed away from cancer.

“It is five deer antlers, and it’s a mold of a deer antler I found when I was seven or eight with him while camping. With each, it goes from gold to black. Each deer antler slowly breaks more and more, and it’s supposed to show how he slowly lost his mind, and was unable to remember us. Each broken piece of the deer antler is someone’s piece. So I have all the grandchildren, my granny, and my dad and my aunt all have pieces. So it’s supposed to be about him and slowly losing him.” Person said.

While she has been creating art all her life, Person really began to dive into it her seventh or eighth grade year. Like many, Person’s passion was highly influenced by a one single person: her old art teacher who “saved her life on many occasions.” Being touched in such a way, this drove Person to study art in college in hopes to be that same person for someone else.

“I want to be able to save someone’s life. Even if it’s just by giving them someone to talk to,” Person said.

While many people see art as a simple hobby that doesn’t pay bills, students like Person are witness to the value art holds.

“Art is an expression for me. For me, being able to draw and make whatever I want, and make it personal, that I can make what I need to be able to, it’s a form of therapy for me, and I love it. It just makes things so amazing.” Person said. “Art should just be something that you feel proud of.”

While the world is in the midst of uncertain times, Person, along with many artists, continue to mark the world around them. She has put out a piece of her for many to see. Person is one example of art in a day-to-day society. It is more evident than many realize, and is more than a mere way to pass time. Art is a part of who society is.

“Art is everywhere and without it we would live in a very bland world,” Person said.

“We believe that the arts can make a difference on the local, national, and international level, and that the arts play a vital role in the future of the global community,” says the West Texas A&M Art Program in their mission and vision statement.