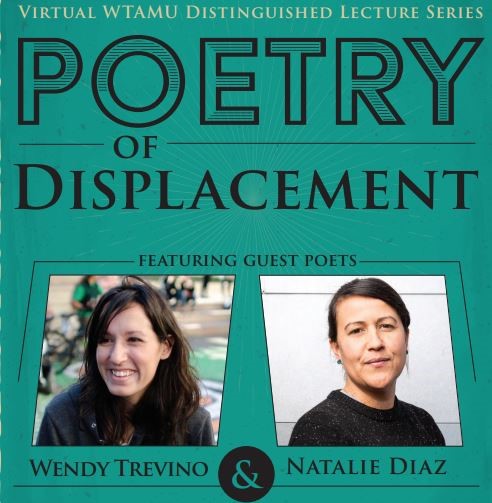 The West Texas A&M University Distinguished Lecture Series and Department of English, Philosophy and Modern Languages sat down on Oct.12, 202pto host award-winning Latinx poets Wendy Trevino and Natalie Diaz in what they titled: “Poetry of Displacement”. The authors discussed writing with all who would join in the afternoon and read their work and talked about its themes in the evening. Both sessions were held on Zoom and were free to all.

“This annual event is a priority for the WT Spanish program that allows us to amplify voices on campus that are not always heard,” said Dr. Andrew Reynolds, professor of Spanish and director of the Spanish Program. “It is a pleasure and honor to host high-profile Latinx women writers on campus each fall.”

Trevino, who read first, is a current resident of San Francisco but is originally from the Rio Grande Valley of South Texas. She read from her first book-length collection of poetry “Cruel Fiction”, which was published in 2018, and an assortment of untitled sonnets.

First, she read her poem “128-131”, which is a somber and detailed account of a three-day long imprisonment during the Occupy movement. It is list-like, precise and unflinching.

“I slept no more than 4 hours.

I was denied birth control.

I heard someone with epilepsy was being denied medication. […]

Another poem, “Summer 2016—For Antifa Sacramento and those young people in San Jose who beat the bejesus out of Trump supporters” recounts reactions to white nationalist riots and the political tensions of that year. And the third poem she read on the topic of revolutionary love, was “Revolutionary Letter”, which began with the following sentiments:

“One thing I’ve learned/come to provisional conclusion about

when it comes to fighting, there are people who will help you

who will stand in the way. Find the people who will help/ be loud:

& clear so they know where you are.”

Next, she read Sonnets 7 to 16 from a collection called “Brazilian is not a Race”. Ended by reading a few untitled sonnets, altogether encompassing her time with riots, nonconformity, race, culture and America’s violent dysphoria.

“We are who we are to them,” Trevino read from her 16th sonnet. “Even when we don’t know who we are to each other. And culture is a record of us figuring that out.”

Diaz, a Mojave resident of Phoenix, Arizona, an enrolled member of the Gila River Indian Tribe, a twice-published poet, a MacArthur Fellow, a Lannan Literary Fellow, a United States Artists Ford Fellow and a Native Arts Council Foundation Artist Fellow, read second from her books “When My Brother Was an Aztec,” and “Postcolonial Love Poem,” which was published in March of 2020. She mostly read from “Postcolonial Love Poem”, which explores the ways in which the United States fails to love its minorities, and discussed her influences, her family and processes. One particularly personal poem dealing with the white gaze and the experiences of Native Americans and minorities in America, entitled “They Don’t Love You Like I Love You” is not only particularly illustrative of her style and topics but also a good representation of the search both poets are taking part in: a search not only for equality and representation, but for love—political, cultural, and unconditional love.

I thought my mother said, ’Wait’,

as in, ‘Give them a little more time

to know your worth’,

when really, she said, ‘Weight’,

for the yoke of myself,

the beast of my country’s burdens,

which is less worse than

when my mother said,