Ballot counting in the 2020 Presidential Election 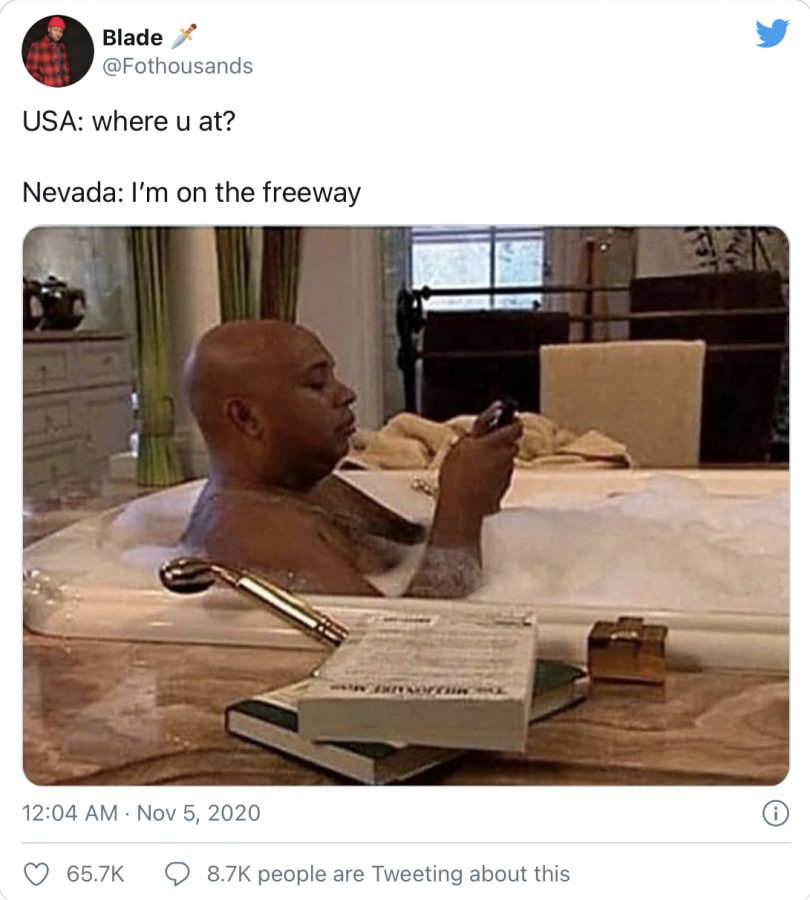 Many memes were posted comparing the counting times between different states, especially Nevada.

If you followed the 2020 Presidential Election, you know that the tallying of the votes was probably one of the longest, most nerve-wracking and entertaining of recent history. Filled with frustration, anxiety and memes, this election will sure be one to remember.

Those keeping track of the elections maps would see that many states started out red but would turn blue later on as ballots were counted. This of course caused a great deal of confusion for the general public on how the results were going to turn out. Bernie Sanders predicted in a Jimmy Fallon interview on October 23 how the counting of the ballots would play out and how it would affect interpretations of the election.

Sanders explained that when the votes are counted, in-person votes are counted first as they are already recorded and mail-in ballots are added into the tally later as they are recorded. He said that people who vote in-person are more likely to be Republican voters and those who vote by mail are more likely to be Democratic voters. This caused the maps tracking the votes counted to appear red at first as the in-person votes were counted first and later turned blue as the mail-in votes were counted.

This caused incumbent President Donald Trump to falsely claim victory on the night of Election Day on social media. Many similar premature victory claims by the Trump campaign caused social media sites like Facebook and Twitter to apply labels to said posts as violating their rules and flagged them as potentially false. These social media sites would also make sure that consumers would be notified that the posts were made before officials called the race.

Those who watched the main news organizations such as FOX, CNN and MSNBC might have noticed the inconsistencies in which they were reporting the amount of electoral votes for both candidates. Each newscast showed different results of the election and were hardly on the same page. This could be due to conflicting sources or prematurely calling victories for the candidates.

Not to mention all the memes created during the counting. Many featured the time it took for Nevada to count their votes compared to other states. Some also displayed alternative endings to the election and future presidency featuring the Simpon’s episodes. A personal favorite was the comeback of “Hannah Montana” quotes.