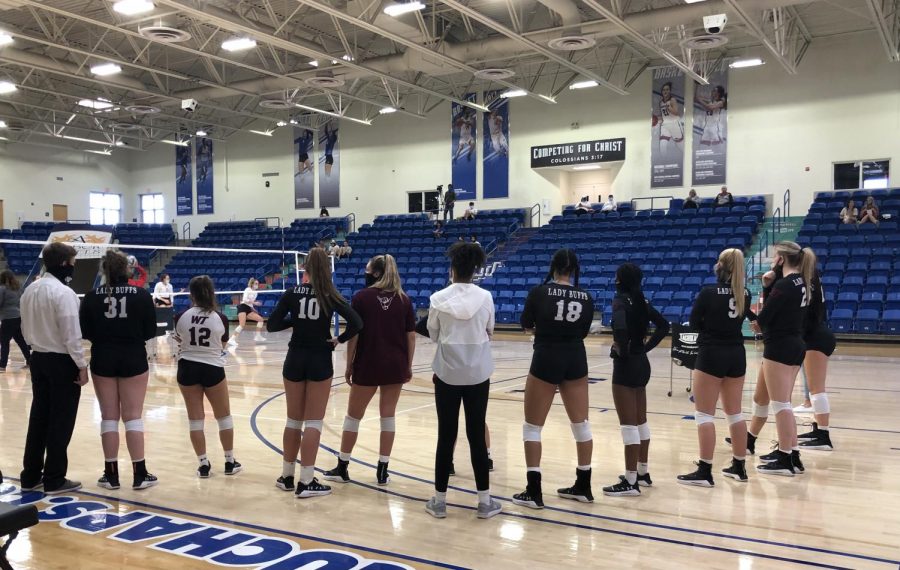 The Lady Buffs checking out the competition.

In the first match, the Lady Buffs started out strong with the first point. It was a close game all the way but came out with the win 25-19. There were strong defensive plays both in the back row and in the front row with tough blocks by sophomore outside hitter, Samantha Jordan.

The Lady Buffs continued to take the first point in the third match. Net play by sophomore middle blocker Katrina Johnson kept the momentum on the Lady Buff’s side. The Chaps called a timeout at 21-18 and with a close match the Lady Buffs took it 25-21.

The lead was taken by the Lady Buffs from the beginning of the fourth match. Blocks and net play from junior outside hitter Torrey Miller and freshman middle blocker, Camy Jones keep the lady buff offense on top and the momentum on their side. Some questionable calls from the referee kept the Lady Buffs on their toes but still couldn’t shake them from this match. The Lady Buffs kept a strong offense even with a surprising shift in momentum from the Chaps at the end. The Lady Buffs took match four 25-21.

The second game was only two out of three and was played 30 minutes after the first game.
This game was more for practice and working on fixing technical errors with the team. Even with this game not being as competitive, the Lady Buffs still pulled through with the win.

The Lady Buff’s fall season was cut short due to COVID-19. They have been able to schedule some fall games just to stay in the competitive spirit.

“Since the start of [COVID-19], our team has not gotten the opportunity to come together and compete. Over the past few weeks, playing Lubbock Chrisian has been a blast,” said junior setter, Sadie Snay. “Just having the chance to compete against someone other than ourselves has taught us to be grateful for what we have. This season is a huge growing time and our team is enjoying every moment!”

The Lady Buffs have a longer season ahead of them with official conference play in the spring. These few games in the fall are helping them prepare for what is to come in the next semester.

“For the rest of this fall we are just continuing to prepare for our spring season. We’ve never had a season in the spring. Right now we are preparing physically and mentally to be the best we can be after the break, learning what our strengths and weaknesses are and gaining confidence in one another,” Snay said.

The future of Lady Buff volleyball is not just looking bright for the spring, but also for the seasons to come. With only three seniors currently on the team, the lady buffs are looking for success farther than just the spring. Junior outside hitter, Torrey Miller expressed her thoughts on having such a young team.

“Playing with a young team isn’t really a foreign concept to me or the team. Last year we were pretty young and this year we’re about the same. It’s been nice having the young girls step up and compete for a spot on the court. I think having a young team is a great advantage so that we can play together for years and really perfect the system,” Miller said.