Joe Biden inaugurated as 46th President of the United Sates 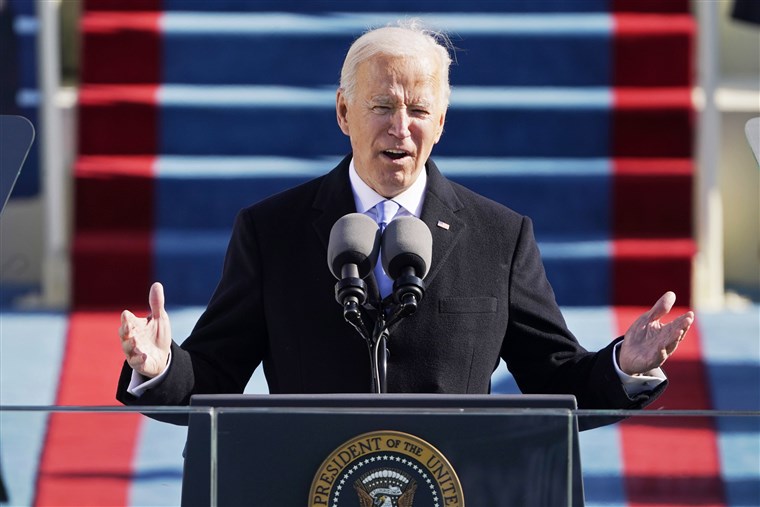 The United States of America’s 59th presidential inauguration ceremony took place yesterday, Jan. 20, 2021 in front of the capitol building in a locked-down Washington D.C. and marked former Vice President Joe Biden’s first day in office as the 46th President of the United States. This moment marked for many a turning point in the contemporary US government, as the peaceful transition of power took place in as normal of circumstances as was possible, after the four-year reign of Donald Trump, which ended in an attempted coup and a record-breaking two impeachments, a global pandemic, and a political rift-widening era of scandal, misinformation, and affiliative divide. Again, because of these circumstances, the inauguration was abnormal, but given the same, it was refreshingly ordinary.

Possibly the most obvious difference between this inauguration and the last was the lack of a crowd. This was due not only to the COVID-19 pandemic, but also the storming of the capitol only two weeks prior. Already a National Special Security Event, the inauguration of President Biden raised concerns of more violence and rioting and because of this, the city of Washington D.C. was shut off and the area around the capitol was fortified. Indeed, this inauguration may prove to have had the second fewest live attendees in the history of the country, but there were more US National Guard members stationed in D.C. on the 20. than are currently stationed in Afghanistan and Iraq combined. Despite all these changes and peculiarities, both Biden and Harris were able to partake in most of the inaugural traditions, such as the walk down Pennsylvania avenue and the visiting of the Tomb of the Unknown Soldier.

Former Presidents Bill Clinton, George W. Bush and Barack Obama were present in the crowd of just about 3000 people, carefully spaced out, and Lady Gaga sang the national anthem. Bush’s scarf blew away during his walk in the precession. Bernie Sanders wore colorful mittens. And Donald Trump was the first incumbent President since Andrew Johnson to not attend his successor’s inauguration, contradicting in action once more his words of unity and transition. Vice President Pence, however, was in attendance to symbolize the peaceful transition of power.

“We celebrate our first African-American, first Asian-American, and first woman Vice President,” said Senator Amy Klobuchar when speaking at the podium about Vice President Kamala Harris, who “stands on the shoulders of so many on this platform who have forged the way to this day.” And in that same vein of hope and progress, poet Amanda Gorman recited her inaugural composition, which she used to promote a vision of America that was not shattered but simply unfinished. In an interview with the New York Times, she said her intent was “to be able to use my words to envision a way in which our country can still come together and can still heal.”

And at the end of the day, newly inaugurated President Biden signed upwards of twelve executive orders. “I thought with the state of the nation today there’s no time to waste. Get to work immediately,” he told those filming his first signing. Most of the orders had to do with anti-COVID-19 action, such as the first order he signed as President, which mandates masks on all federal property. And the third order he signed put the US back in the Paris Accords. Kamala Harris, also immediately after being sworn in, administered oaths of office to three Democratic Senators and with this the Democrats took the Senate majority. The administration has been very open about their attempts to rectify mistakes of the past and be assertive, active, and already acting. Thus far they have delivered a first day that could mean actual hope for a vast number of Americans.