The tortoises and the professor 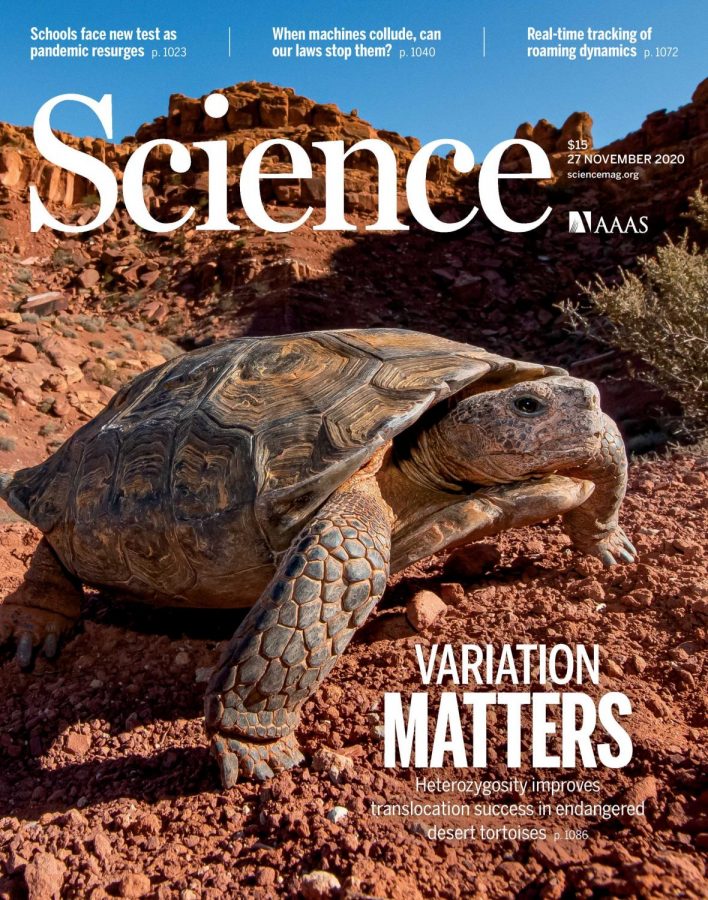 Dr. Peter Scott along with other co-authors researched the translocation an genetics of the Mojave Desert Tortoises.

If you happen to stumble upon the November issue of Science Magazine, you’ll see the cover has a picture of a Mojave Desert Tortoise. As you flip through, you’ll also most likely find an article written by West Texas A&M University’s very own Dr. Peter Scott.

Dr. Scott, along with several other scientists, were published in the Nov. 27, 2020 issue of the peer-reviewed journal in association with American Association for the Advancement of Science (AAAS).

According to the research published, “Although the tortoise is a ubiquitous member of the relatively intact desert ecosystem, decreasing population trends led to the early listing of the species as threatened under the U.S. Endangered Species Act.”

The research began with the U.S. Fish and Wildlife Service doing experimental translocation of animals in order to recover populations.

“It’s a collaborative project. Actually other aspects of it are still ongoing, between a handful of scientists, including myself, and some scientists that work for the U.S. Fish and Wildlife Service,”said assistant professor of biology Dr. Peter Scott.

For Dr. Scott, the research process took about three years. Along with that, there was a significant amount of preparation and work that was put into the development and research.

“The desert tortoise work is still ongoing and so the genetic aspect of that work was just one aspect of it…, I’m still involved in other aspects of desert tortoise conservation and population genetics,” Dr. Scott said.

Science Magazine is known as one of the world’s top academic journals.

“To be published in Science is spectacular. Very few scientists in their career have an opportunity to publish in Science. It’s really exciting that we have that caliber of Science scientists here,” said Dean of agriculture and of the College of Agriculture and Natural Sciences, Dr. Kevin Pond.

Dr. Scott and the other co-authors worked extensively to put together all of the research and information in order to submit their findings for publication.

“Unlike other lots of scientific journals, you kind of have all of the work upfront. This is a funny one, because it has tons and tons of supplemental material, where all the real work is. You kind of have a nice little glossy camera, but they limit you to, you know, a couple 1000 words,” Dr. Scott said.

Along with the accomplishment of being published, Dr. Scott also hopes for others to recognize the importance of wildlife conservation.

“Myself and all the co-authors, you know, hope more than kind of the prestige or whatever that comes with that, really kind of brings awareness to the conservation community that there’s potentially another metric that folks can use when they want to protect whatever it is,” Dr. Scott said.

For more information regarding Dr. Scotts research or to read the full article, please visit sciencemag.org.