The Return of the masked singer 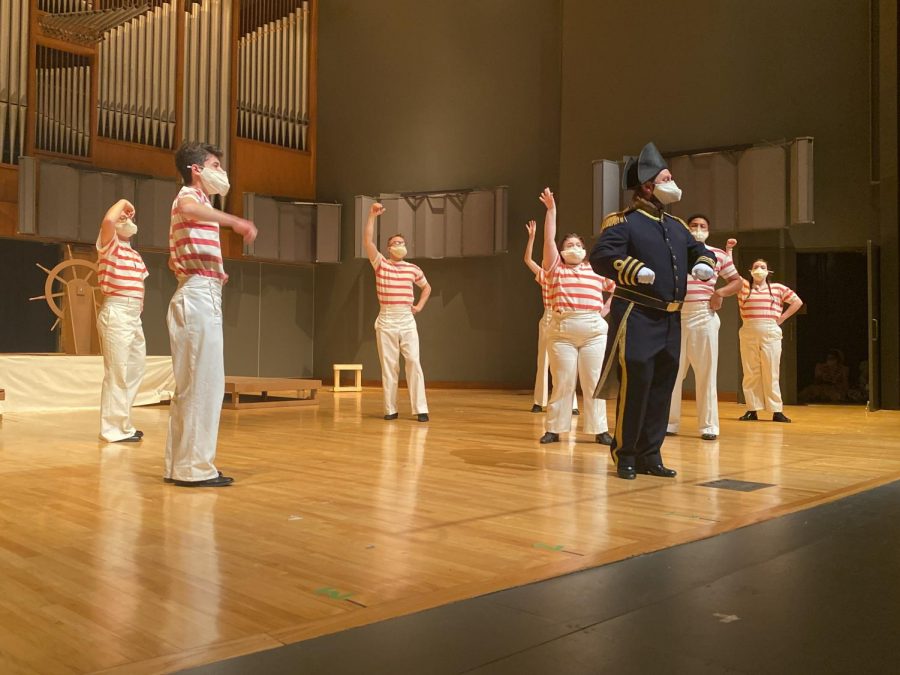 The Buffs made a return to the theatre this past weekend with H.M.S Pinafore an opera workshop. This time however, with an in person audience which as of late has not been the case since the arrival of COVID-19.

“The show is H.M.S Pinafore and this is a Gilbert and Sullivan operetta known for their being a very light comic entertainment. We think of these as being sort of the precursors of, of musical theater. They were written in the 19th century. So, in the mid 1800s. So, they’re older works, but still relevant. Yeah, so this is, this involves a cast of singers and a big chorus and an orchestra. So, it’s a lot of people,” director of the school of music Dr. Robert Hansen said.

This being a moderately large show with many moving pieces as well as people, COVID-19 restrictions were in place with a limited number of people attending the performance as well as cast members having to follow certain protocols in order to have a safe production.

“We’ve done some things online, some video concerts, if you will, but it’s just not the same as performing with your colleagues in a live setting. And when we found out that we could have an audience limited. We can have 70 per performance. So, we printed exactly 70 tickets per performance. And we were just so excited for this show in particular, without an audience, I mean, it’s just painful, because it’s so funny. And if you don’t have that laughter to feed off of as an actor,” assistant professor of voice and opera and director of the production Sarah Beckham-Turner said.

This goes to show that even with coronavirus putting a damper on everything in the world, with proper precautions and a willful spirit the theatre hopefully will continue in person performances for the foreseeable future.

According to wtamu.edu/news , all production members are required to take weekly COVID-19 tests. If anyone tests positive, they are required to attend rehearsals via Zoom. Everyone involved is masked constantly and Beckham-Turner has staged the production to limit most up-close personal interactions. The performers will use “The Singer’s Mask,” a face covering designed by Broadway professionals.

This being the first inperson performance of 2021, the show did well in sales. Even with limiting ticket numbers, both shows sold out and a third show was created to try and meet the demand for wanting to watch this performance.

“The energy levels are really high and the same thing is true with I think, with the audience. The tickets sold out almost immediately, within just a couple of days. Even we, even added the Friday night was not supposed to be a performance. The demand was so great that we, we said, ‘Okay, we’ll make that last Friday dress rehearsals actually a performance.’ So we expanded from two to three performances,” Dr. Hansen said.