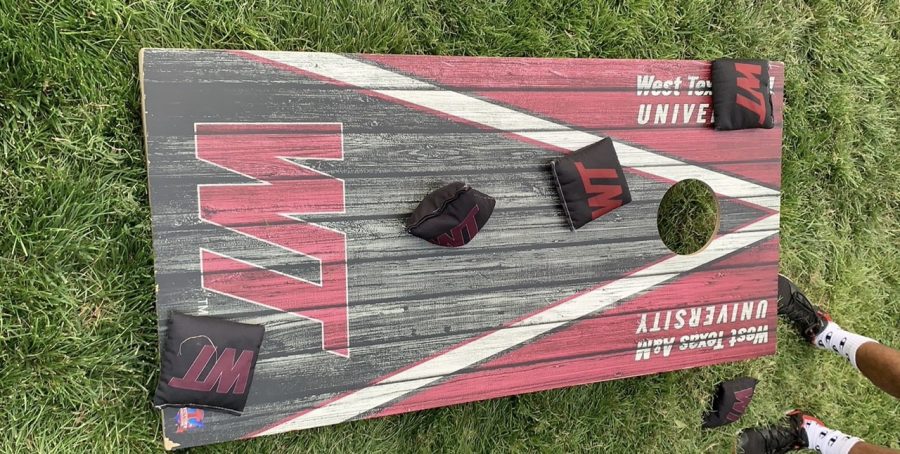 Photo of a Corn hole board with pouches on it

The current COVID-19 pandemic has sucked the life out of college activities in almost every country worldwide, and West Texas A&M University is no exception. Many sports activities have either been on the fallout, not to mention those that have new regulations in place to be adhered to. One of the affected sports here at WTAMU is Cornhole.

Cornhole is usually directed towards the intramural, as well as with Rec Sports, and since the pandemic hit, organizers have had to reassess how intramurals are done. During the fall semester, softball was played instead of flag football and outdoor volleyball was played instead of indoor volleyball. The WTAMU Virgil Henson Activities Center then took it upon itself to offer a safe haven for students to still do some physical activity, as long as all safety protocols are adhered to, social distancing most importantly.

“Yes, and that’s the thing with the activity center: we have all of our areas open, as long as we can socially distance and not have contact,” Justin Cornelsen, Director of recreational sports said. “Still, at least for the first part of the semester, it may be for all semester content.”

Cornhole is open to anyone associated with, or who identifies as WTAMU staff, faculty or students. As of now, the links have been closed, but interested persons are still able to check them out at the A.C. Also, the stakeholders consider this period a test run period to see how feasible it could be, since there has not been an actual cornhole league in WT over the years.

“So, speaking among other peers in the intramural world, I was given a list that I kind of catered to WT intramurals and I have something called ‘sports by risk’,” Daniel Kratz, Assistant Director of recreational sports said. “And so, we kind of go off of Amarillo and Canyon on their threat levels. We are at threat level red, and what that means is, we can only do low risk sports.”

The major stakeholders are positive that participation for the intramurals would be much higher, as soon as the regulations regarding COVID-19 are lifted because many students are itching to do something more active than they currently are able to do. This notion notwithstanding, they would like to keep everyone as safe as possible. The opportunity to have fun in these times requires keeping safe.

“We figured that cornhole would be relatively popular because it’s been a good one-day event for us in the past, and we know that cornhole is showing up on ESPN,” Daniel Kratz said. “It’s being shown on television a little bit more and more, to be offered to the students and the deputy community.”