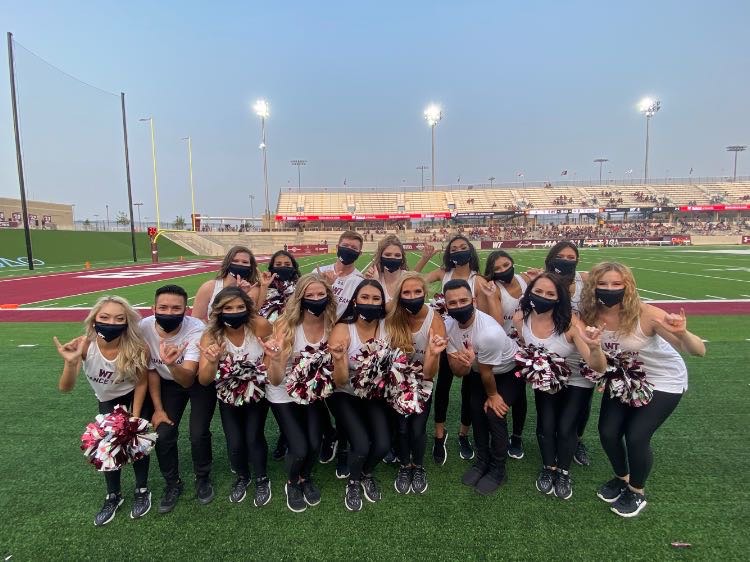 The dance team at West Texas A&M University is now becoming a staple for the school’s athletics and fine arts departments. The dance team formed roughly two years ago and has been entertaining audiences at the university’s football and basketball games. However, COVID-19 has brought unexpected challenges to the dance team, even more so this past fall semester.

“The dancers practiced and performed the entire season in masks, only taking them off for water while being socially distant,” said Kaylee A. Morrison, dance team director. “Dancers had to have symptom checks before practice and testing before each football game. Even with all the precautions, the dance team could only participate in two football games for various COVID-19 related reasons.”

Morrison also struggled seeing her students live out their dance season in the constraints of a global pandemic.

“The dance team had some extraordinary talent this year, but we could not entirely showcase the amazing talent. That was hard for me as the director, knowing our fantastic dancers could not shine to their fullest.”

Not only did Morrison as an instructor struggle through COVID-19’s obstacles, but her dance students as well felt the challenges that were brought to their team.

Alexis Ayala is a junior dance major and has been a part of the dance team since its return. “ We would prepare many routines and practice sidelines throughout the week in hopes of being able to perform at the games every weekend, but sadly many games were canceled,” Ayala said. “We made the best out of every situation, whether we were able to perform or not, we were still at practice training and working hard to improve.”
For senior Erika Castañon, COVID-19 has impacted her senior year negatively and has left her without a final good football season.

“Overall, I think the entire dance team really missed not having a “regular” season, but we were very flexible with the schedules and appreciative that we did get to attend a small number of games,” Castañon said. “Personally, when I realized that this last season was not going to be the same as the previous one, I became upset due to the fact that I am a senior and am planning on graduating this semester and I would really never get to experience another athletic season as a collegiate dancer on the sidelines.”

Despite all the setbacks COVID-19 gave to the dance team this previous year, the squad has become stronger and bonded through the uncertain times.

“We learned to not only make the best out of every situation but lift each other up as a team whenever times would get tough,” Ayala said.

“In a way, I believe COVID helped the team grow as professionals and leaders due to the fact that even through tough times we as a team were able to become flexible with all different kinds of schedule changes and that no matter the circumstances, we always gave it our all,” Castañon said.

Although the dance team is finished attending games for the school year, the team is working hard to prepare for future events. They are also preparing for holding tryouts on Saturday, April 24, 2021 from 9:00 a.m. to 4:00 p.m. on WTAMU’s campus. More information can be found on the athletic website.