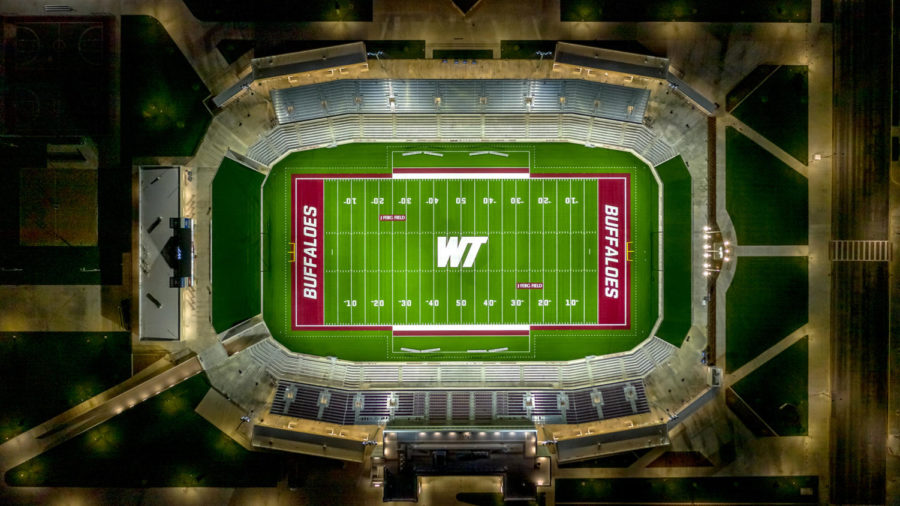 A drone-view of the WT football field.

The football team has no schedules for this spring, but have their first 2021 season opener on Thursday, Sept. 2, 2021 against Texas College, followed by the Lone Star Conference opener at UT Permian Basin on Sept. 11, 2021. On the golf side, the Buffs placed no. 15 at the 2021 Lion Invitational at the Trophy Club Country Club on March 23, 2021. The Lady Buffs however, finished fifth at the 2021 Lone Star Conference Championships at Texas Rangers Golf Club in Arlington, Texas

The softball team has had their longest streak since the 2019 season and have been ranked no. 12 in the National Fastpitch Coaches Association Division II Top 25 list. This would be the Lady Buffs’ seventh straight week ranking.

The Buff’s track team has been ranked third in the NCAA Division II National Rating Index released by the U.S Track & Field and Cross-Country Coaches Association on Tuesday afternoon. With a total of 220.80 points, the team ranked just behind Grand Valley State and Angelo State Universities. The Lady Buffs Track Team is ranked first in the same Division II rating index with a total of 270.39 points. Both men’s and women’s teams are the current LSC champions.

The volleyball team snapped a nine-match winning streak at their quarterfinal game to bring their spring season in the Lone Star Conference Championships to an end. The Lady Buffs completed the spring season with a perfect 6-0 mark inside of The Box for the first unbeaten season in the facility since the year 2013.

Altogether, the athletics teams deserve a huge congratulations combining academic work, practice sessions and the challenges that COVID-19 has served the world with. Many of these athletes have projected the image of WTAMU by making honor teams, being named Lone Star Conference and National Athletes of the weeks and months, as well as copping All-American honors. As always, “On, on Buffaloes!”