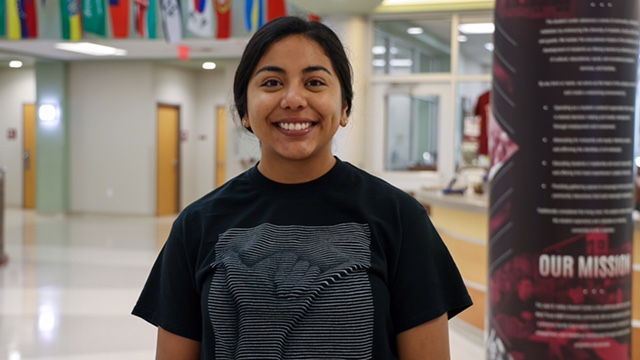 West Texas A&M University graduate, Alondra Villa, will spend this 2021-2022 year working in the Galicia region of Spain as part of a nationally competitive scholarship she has been awarded, the Fulbright English Teaching Assistantship. Villa graduated with her bachelor’s degree in interdisciplinary studies and education in May 2021.

Fulbright Awards are nationally competitive, and recipients are selected in an open, merit-based competition that considers applicants’ leadership potential, academic and professional achievement, and record of service.

When reflecting on her time at WTAMU, Villa believes two experiences have prepared her the most for this opportunity. One is Rogers Lead WT, which she says taught her not only about leadership but also the benefits of challenging herself to grow. The other was volunteering to teach adult English as a second language (ESL) classes with Catholic Charities in Amarillo.

Of her time volunteering with Catholic Charities, she said, “This really opened my eyes to so many other languages and cultures. Seeing the value learning another language added to my students’ lives was incredible.”

Villa found out about this opportunity when Laura Seals, former director of nationally competitive scholarships, came to several of Villa’s classes to talk about different programs the students could apply for. Although she originally wanted to study abroad during her time at WTAMU, the COVID-19 pandemic made it impossible.

Seals said around one in 10 applicants go on to win a Fulbright award, and about half of the semi-finalists will receive a Fulbright award. Students can apply for the Fulbright starting in their senior year of their undergraduate degree, but students must have completed their bachelor’s degree before beginning the program.

Growing up as a lower-socioeconomic student, Villa says education was vital to her success and the wonderful teachers she has had along the way have given her the support system that has led to that success.

“I want to be able to provide that support system for all the students I have the opportunity to reach,” Villa said.

After teaching for a while, Villa would like to continue her education, enabling her to serve in other areas of the education system.

Villa applied to complete her assistantship in Spain because it gives her the opportunity to practice her Spanish and experience living in Europe. Most of all, she wants to experience the culture and different ways of thinking.

Carolina Galloway, director for study abroad and nationally competitive scholarships at WTAMU, encourages more WTAMU students to take advantage of opportunities such as this.

“When you go into the workplace, you’re really going to need to deal with people from different backgrounds, people who speak different languages, people who do things different than what you’re used to,” Galloway said.

Although Fulbright Awards are nationally competitive, Villa is proof that WTAMU students have what it takes to win these scholarships and receive the valuable opportunities that they provide.